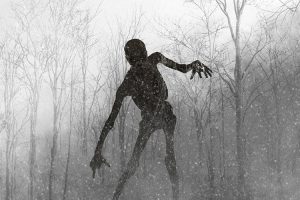 A tulpa is an ancient mystical concept found in Tibetan Hindu and Buddhist belief systems. The word literally means ‘to build’ or ‘to construct’. The concept of a tulpa is constructing a being with your mind. While some people find this appealing, it can actually be quite a dangerous practices. It can even be done without realizing it.

According to Tibetan spiritual teachings, monks considered tulpas a thought form that takes on a life of its own. The belief is not unlike more popular concepts of today like The Secret – belief in something gives it energy, which in turn helps to manifest it.

After all, we are beings that are made of energy on an atomic level. The universe is filled with energy. And thought is nothing but electrical impulses – energy.

Monks would construct these creatures of the mind, often deliberately. They would interact with these creatures and sometimes these creatures would act something like an astral doppelganger. They also might be created to serve various purposes, such as to send messages or various magical tasks.

Unfortunately, tulpas proved that they’re not completely safe. They do seem perfectly harmless for a while, but the more energy they’re given the more they take on a life of their own. When this happens, the less they like to be controlled.

Tulpas can become so strong they can even go on to manifest their own tulpas. They can turn into something of a spiritual Frankenstein’s monster.

Tulpas are not just beings that are created deliberately. They can also be created inadvertently. This becomes very dangerous when they’re manifesting from the mind of someone who is particularly negative, indoctrinated, fearful, angry or disturbed.

This can be especially dangerous when entire families or communities give such energy to such beings—the combined thoughts and fears of scary creatures can manifest forms of the very beings that create the fear in the first place.

Many people who believe they have encountered demons in their lives are often just struggling with tulpas of their own making.

Getting Rid of Tulpas

The problem with tulpas is that they can’t just be exorcized like a demon or set to move on like a ghost. Their energy has to be essentially broken down and reabsorbed. In order to do this means you need to face your tulpas.

Meditation is the place to begin when you have decided to destroy a tulpa. Sit in a quiet place with soft or dim lighting and go into a meditative state. You need to summon your tulpa to you by calling it in your mind.

Depending on how strong it has become and how much of a mind of its own it has developed, this could prove difficult and may take a few attempts. Keep doing it though; remember, no matter how strong it gets, you’re still the creator and you’re still in charge.

Envision your tulpa surrounded by a force field of sorts; a field of white light. This light will protect you from its attempts to stop you. You can envision this light breaking down and reabsorbing the energy of the tulpa, which you can then absorb back into your own spiritual aura. Again, this can take a few sessions, but you’ll see your tulpa readily weakening.

Once you’ve dispersed and reabsorbed the energy, cleanse yourself to transform it into something more positive and get rid of the negative. Avoid thinking of your tulpa any further so you don’t accidentally re-create it; remember to keep your thoughts positive.