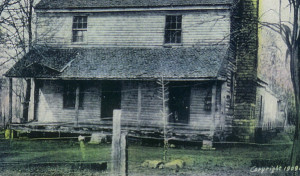 According to most accounts, the disturbances began one night in 1817 with mysterious rappings on the windows of the Bells’ cabin near Clarksville, Tennessee.

Twelve-year-old Elizabeth “Betsy” Bell started to complain of an invisible rat gnawing on her bedpost at night, and the entire family, including the parents, John and Luce, experienced the midnight confusion of having their covers pulled off their beds.

When the Bell family arose one morning, stones littered the floor of their front room and the furniture had been overturned. The kids, Betsy, John, Drewry, Joel, and Richard, were goggle-eyed and spoke of ghosts and goblins.

John Bell lectured his family severely. They would keep the problem to themselves. They didn’t want their family to become the subject for common and unsavory gossip. That night, Richard was awakened by something pulling his hair, raising his head right off the pillow.

Joel began screaming at his brother’s plight, and from her room, Betsy began howling that the gnawing rat had begun to pull her hair, too.

Most of the family members awakened the next day with sore scalps, and John Bell reversed his decision. It was obvious that they required help. That day he would confide in James Johnson, their nearest neighbor and closest friend. Johnson accompanied his friend to the cabin that evening.

The tale that Bell told was an incredible one, but Johnson knew that his neighbor was not given to flights of fancy. While he watched at Betsy’s bedside that night, Johnson saw the young girl receive several blows on the cheeks from an invisible antagonist.

He adjured the spirit to stop in the name of the Lord Jesus Christ, and there was no activity from the ghost for several minutes, but then Betsy’s hair received a yank that brought a cry of pain from her lips.

Again Johnson adjured the evil spirit, and it released the girl’s hair. Johnson concluded that the spirit understood the human language and that Betsy was the center of the haunting. He met with other neighbors, and they made the decision to help the Bell family as best they could.

A committee kept watch at the Bell house all night to try to placate the spirit, but all this accomplished was to bring about an especially vicious attack on the unfortunate Betsy.

A number of neighbors volunteered their own daughters to sleep with Betsy, but this only managed to terrorize the other girls as well. Nor did it accomplish any useful purpose to take Betsy out of the cabin into the home of neighbors—the trouble simply followed her there and upset the entire house.

By now the haunting had achieved wide notoriety, and the disturbances were thought to be the work of a witch, who had set her evil spirits upon the Bell family.

Each night the house was filled with those who sat up trying to get the “witch” to talk or to communicate with them by rapping on the walls. The disturbances soon became powerful enough to move outside the cabin and away from Betsy.

Neighbors stated seeing lights “like candles or lamps” flitting through the fields, and farmers began to suffer stone-throwing attacks from the Bell Witch. These particular peltings seemed to have been more in the nature of fun than some of the other manifestations of the spirit.

Young boys in the area would often play catch with the witch if she happened to throw something at them on their way home from school. Once an observer witnessed several boys get suddenly pelted with sticks that flew from a nearby thicket.

The sticks did not strike the boys with much force, and, with a great deal of laughter, the boys scooped the sticks up and hurled them back into the thicket. Once again, the sticks came flying back out.

The observer cut notches in several of the sticks with his knife before the boys once again returned the witch’s volley. He was able to identify his markings when the playful entity once again flung the sticks from the thicket.

The witch was not so gentle with the scoffers who came to the Bell home to expose the manifestations as trickery. Those who stayed the night invariably had their covers jerked from their beds. If they resisted the witch’s yanking, they were slapped soundly on the face.

Spiritists, clergymen, reporters, and curiosity seekers had waged a ceaseless campaign to urge the witch to talk and declare herself and her intentions. At last their efforts were rewarded.

At first the voice was only a whistling kind of indistinct babble, then it became bolder—a husky whisper speaking from darkened corners. At last, it became a full-toned voice that spoke not only in darkness but also in lighted rooms and, finally, during the day as well as the night.

Immediately the charge of ventriloquism was heard from the skeptical. To put a halt to the accusations of trickery, John Jr. brought in a doctor, who placed his hand over Betsy’s mouth and listened at her throat while the witch’s voice chatted amicably from a far corner of the room.

The doctor decreed that the girl was in no way connected with the sounds. From the beginning of the witch’s visitation, it had minced no words in its dislike of John Bell, Betsy’s father.

The spirit often swore to visitors in the Bell home that she would keep after him until the end of his days. To a visitor’s question concerning its identity, the witch once answered that it was a spirit who had once been very happy, but it had been disturbed and made unhappy.

Later, the witch declared itself to be the spirit of an Indian and sent the family on a wild bone chase to gather up all of its skeletal remains. If her bones were all put back together, she would be able to rest in peace, the entity lied to them.

Later, the witch told the family with a merry cackle that she was the ghost of old Kate Batts, a woman who had been an eccentric recluse and who had earned the appellation of “witch” from the citizens of Clarksville.

When the word spread that it was the ghost of old Kate who was haunting the Bells, the entire mystery became much more credible to several doubting neighbors. The Bell home became crowded, indeed, when the witch’s “family” moved in with her.

Four hell-raisers named Blackdog, Mathematics, Cypocryphy, and Jerusalem, each speaking in distinct voices of their own, made every night party time during their stay with their “mother.”

The sounds of raucous laughter rattled the shingles of the Bell home, and witnesses noted the strong scent of whiskey that permeated every room in the house. When two local preachers arrived to investigate the disturbances, the witch delivered each of their Sunday sermons word for word and in a perfect imitation of their own voices.

The Bell Witch was adept at producing odd objects apparently from thin air. Once, at one of Mrs. Bell’s Bible study groups, the ladies were showered with fresh fruits. Betsy’s friends were treated to bananas at one of her birthday parties.

Although the father, John Bell, was the butt of malicious pranks and cruel blows, the witch looked after Mrs. Bell solicitously. Once when she was ill, the witch was heard to tell her to hold out her hands.

When Luce Bell did so, a large quantity of hazelnuts dropped into her palms. When Mrs. Bell weakly complained that she could not crack them, family members and neighbors watched in wide-eyed fascination as the nuts cracked open and the meats were sorted from the shells.