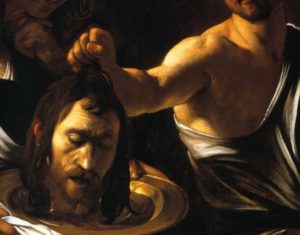 The legend says severed heads have been known to blink, react to stimulus and yes, even try to talk.

One of the earliest and best-known proofs of this came from a Dr. Beaurieux, who conducted an experiment on a French murderer named Languille.

After he was guillotined, Languille’s eyes and mouth continued to move for five to six seconds, at which point he appeared to pass on. But then when Beaurieux shouted the subject’s name, Languille’s eyes popped open.

In Beaurieux’s own words: “Languille’s eyes very definitely fixed themselves on mine, the pupils focusing themselves,” and the good doctor continued to get similar results for up to 30 seconds.

Here we find a first-hand account of the aftermath of an accident, in which one of the men in the car lost his head.

“My friend’s head came to rest face up, and (from my angle) upside-down. As I watched, his mouth opened and closed no less than two times. The facial expressions he displayed were first of shock or confusion, followed by terror or grief. I cannot exaggerate and say that he was looking all around, but he did display ocular movement in that his eyes moved from me, to his body, and back to me.”

Yes, that does seem to indicate that there was a long moment of awareness where the dude’s living head had time to look and see his own body, complete with the red hole where his head used to be attached.

Pretty chilling stuff, so let’s leave you on a lighter note.

In Africa, there have been certain tribes who will tie your head to a springy sapling before chopping it off, so that your head is then catapulted into the distance after the final blow.

Thus your last few moments of awareness are of your head sailing breezily through the air. Seriously, if you have to die, that has to be like one of the top five ways.