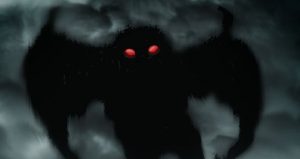 The Mothman is one of the most popular cryptic creatures of folk legend in America, along with such cryptids as the Chupacabra and Bigfoot.

For a period in the 1960s, Mothman sightings in America were commonplace, particularly in West Virginia. Following are some accounts of sightings, many of which are thought to be meaningful.

First of the Mothman Sightings in America

On November 15, 1966, two couples from Point Pleasant, West Virginia were driving past an old and abandoned factory just north of town when they saw two glowing red lights near the factory’s gate, according to their report.

They stopped the car, and went up to see what it was, and to their surprise, the red lights were not actual lights at all, but rather the glowing eyes of one of the most eerie creatures ever reported.

The couples reported a being, which stood at around seven feet, and had massive wings folded across its back. The four people then claimed that they got back into their car, and sped away, but for some time, they were pursued by the creature which utilized its massive wings.

The Second Mothman Sighting on November 16, 1966

A couple of people were visiting friends on the evening of November 16, the night after the first sighting, at the same time as other towns people were combing the area for the reported mothman.

These people were visiting a friends’ house, located near an abandoned TNT plant (near where the creature was spotted the night before), when they saw a dark gray creature with folded wings and glowing red eyes rise up. The creature rose up from behind a parked vehicle.

As one person (a guest, whose car the creature was seen behind) phoned police, according to reports, the cryptic creature approached, and peered in at them through the window.

On November 24, a man reported seeing the Mothman flying overhead of the abandoned facility by which it was first spotted. The following evening, a man claimed to have seen a strange creature standing in a cornfield outside of Point Pleasant.

After the sighting, the man reportedly sped away. He was reportedly pursued by the eerie creature for some distance. The next day (the 26th of November, 1966) a woman reported spotting the creature near Charleston, West Virginia, and on the 27th, two people reported the Mothman in different places at different times.

Mothman Sightings as a Warning?

Mothman sightings continued with frequency for over a year, and at times, the creature was reported perched atop the Silver Bridge, over the Ohio River, which formed the West Virginia-Ohio border at Point Pleasant.

On December 15, 1967, the bridge collapsed due to a manufacturing flaw from its 1928 construction, resulting in 46 deaths. After that, sightings lessened in frequency.

This led people to wonder if the eerie and mysterious creature appeared as a warning for disasters, or as a possible cause of the disaster.

Although reports have come in from places nationwide, Mothman sightings in America were most meaningful in West Virginia in the late 1960s.

This peculiar creature is a popular subject in the field of cryptozoology, which deals with creatures not recognized by biology because of their status as “unconfirmed.”

Camping Cryptids: Creatures You May Encounter In Summer