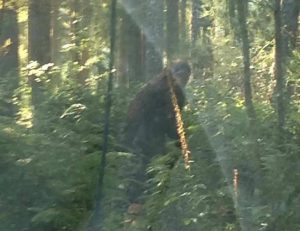 Around eighteen months ago, a fisherman near the Hoh River in Washington state captured an image which appears to be of a large, bipedal creature.

This image was submitted to the Rocky Mountain Sasquatch Organization by ‘Ron B’, who told of his friend’s fishing trip during which the photo was taken.

Additionally, Ron claimed to have had several encounters with such a creature in the same area himself. He reported hearing talking and howling, as well as a tree knock in October of the same year.

“I myself have seen it,” he wrote. “Also have heard it talking and howling.”

“Had a tree knock in October this year after shooting my 10-22. I knocked back then felt it best to leave. Talking sounds like jibberish or better explanation of water running over a culvert.”

“As soon as I made noise it stopped. I just rolled a doe in a can.”

The question remains: Is this photograph really of a genuine Bigfoot or something else?

Mother Filming Her Child captured A Tiny Creature on Camera