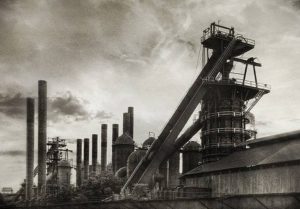 It’s no big secret that industrial manufacturing facilities can be extremely dangerous, but throw in a cramped budget workspace in a pre-unionized America filled with boiling liquid metal and you have a disaster recipe. This was the case in the late 19th century at a furnace factory in Birmingham Alabama.

Many workers lost their lives in horrifying ways, but more terrifying is that their remains became a part of the manufactured here. Welcome to Sloss Furnaces…

From 1882 to 1971 the Sloss Furnaces operated as a pig iron-producing blast furnaces, conditions within the manufactory were extreme to say the least. Sloss workers may have been paid, but make no mistake about it, they were slaves.

Historical photos of the Sloss operations in Birmingham show armed guards enforcing workflow, and tenement housing laughably referred to as worker’s living quarters. On any given day the temperatures within the building could exceed 150°F, 20°F hotter than the hottest day in American history, large pools of molten iron would swirl below flimsy catwalks, and poor ventilation would have caused fumes to have an inebriating effect on the densely packed work force.

When a man falls from a catwalk into a massive boiling vat of liquid metal you can imagine it’s quite difficult to get him out. In the late 19th century and early 20th century it was quite often easier and more efficient to simply leave him in.

Just four years after its opening Sloss sold the company to investors who then reorganized and merged it into Sloss-Sheffield Steel and Iron Company. By the 1920s Sloss-Sheffield had become America’s second largest producer of pig-iron, a metal ingot known for not being fickle about non-iron contaminates, in this case – people.

The Sloss Furnaces factory has its fair share of ghosts and poltergeists, many of which can be seen labouring as though carrying out their duties on equipment no longer present, but the really creepy part is the spirits that left the factory.

Due to the nature of pig-iron and the size of Sloss-Sheffield’s business, it’s impossible to even estimate how many iron products dating back to the early 20th century, many still in use, have human remains as one of their ingredients.

Sloss Furnaces is still in use, but now as a workshop for metal working trainees. The students studying here refer to their school as the “Sloss Fright Furnace”, and each year at Halloween the entire facility is modified into a horror themed attraction of the same name, but that’s not why the students call it that.

The short list of phenomenon reported by students includes phantom voices, bangs, breathing and screams. Students have been touched, pushed, pulled, and physically attacked at the site as well adding a legitimate poltergeist level to the encounters.

Just entering the building you would statistically have a 50/50 chance of witnessing light anomalies, mysterious mists, electronic disturbances, shadow figures, feelings of unease, being watched, not being wanted, and cold and hot spots.

If that level of paranormal activity exists in the factory it’s not hard to imagine that the iron girders holding up your floor, or the wood burning stove at your cabin might be just a little radioactive with the souls of exploited workers that died in horrifyingly excruciating ways.