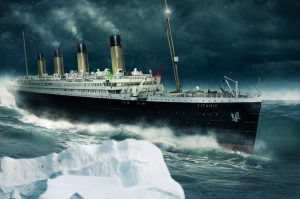 April 15, 2012 was the 100th anniversary of the RMS Titanic’s sinking. The history of the ship has been popular. Recently, ghostly accounts have emerged.

Ghosts of people who died in the disaster haunt a former mortuary where their bodies were kept that also had the Titanic’s relics on display. Two survivors, a doctor and a legendary woman, are believed to visit their former homes.

The haunted places include an apartment, a private residence, the Five Fisherman Restaurant, the Georgia Aquarium and a museum.

Jaime Rodriguez, the building’s resident manager, didn’t say anything to his wife or his three children about seeing a man’s ghost in a bedroom until his wife mentioned the specter that she sees in the room.

She told him that the children and the dog also saw the phantasm. None of them could figure out whose ghost he was. The family read about the late Dr. Henry Washington Dodge and realized that he was the haunter.

Dodge was a prosperous medical doctor who retired to go into politics. He was successful in this endeavor. He and his wife were very prominent in San Francisco’s elite society. He survived the Titanic’s sinking, along with his wife and young son. He knew people asked why he survived when children and women died in the gelid water.

Dodge went public with what happened the night of the tragedy. He said many passengers decided to stay aboard the ship. The officers insisted that, under the worst conditions, the Titanic couldn’t sink in less than 8 or 10 hours and rescue ships were expected within an hour or two.

He put his family into a lifeboat and helped others get into them. After a call for women and children produced no answers, he boarded into partially loaded lifeboat Number 13. People didn’t believe him.

Dodge went into a business venture and was accused of illegal activity and endured a lawsuit. He went into a deep depression. He was hospitalized for what was believed to be suicide watch. After he was discharged, he went into the apartment and shot himself in the head.

When that failed, he tottered to the elevator and jumped out of the first floor window. He was taken to a hospital where he died 3 days later.

After the Rodríguezes found out who the ghost was, they treated Dodge like a special guest. Jaime told the apparition that it was his home and he was welcome there any time. Dodge’s ghost never appeared again.

They have rented it out for the past ten years. The captain’s ghost has been sighted. Other tenants have heard things bumping during the night and felt a frosty chill. None of the renters moved out because of the paranormal happenings.

A reported mysterious “flood” in the building turned out to not be paranormal activity. A young tenant couple had a party, put the dishes in the sink, turned the water on, then went away for the weekend.

In April 1912, 209 victims’ bodies were taken to the, then, Snow & Co. Funeral Parlour on Argyle Street, in Halifax, Nova Scotia, Canada. The pulley used to lift the Titanic corpses to the upper level still hangs in the Wine Room’s ceiling.

Manager Gary MacDonald said, if the ghosts are ignored, they play pranks, including making glasses fly off of the shelves, typical poltergeist activity.

Ghostly Activity in the Georgia Aquarium

There are hundreds of relics in the “Titanic Aquatic” on exhibit in the aquarium’s northwest corner. Aquarium spokeswoman Meghann Gibbons said that there were reports of mysterious activity when people were working on the display.

Volunteer Margarit Mourino said she felt something invisible moving above her head and in her hair. She thinks it was a ghost from the Titanic.

There have been reports of EVP, electronic voice phenomena, in which spectral voices are heard, the sighting of shadowy forms in dark corridors and accounts of paranormal phenomena that follow the display.

Born Margaret Tobin, she was involved in the early feminist movement and distinguished herself in many ways. After the Titanic collided with the iceberg, Molly helped others board lifeboats and, finally, was required to board lifeboat Number Six.

While she was aboard the Carpathia, the ship that rescued survivors, she helped comfort the survivors. By the time the ship arrived in the New York harbor, Molly had helped create the Survivor’s Committee, been elected as chair and raised almost $10,000 for destitute survivors.

She remained on the Carpathia until all Titanic survivors met with family, friends, or received medical or emergency aid.

Molly’s former mansion is now a museum. Visitors and the staff have reported smelling her favorite rose perfume. Some people have reported seeing the ghosts of Molly, her husband, James Brown and Molly’s mother.

Some have smelled Mr. Brown’s tobacco while others have seen furniture moving of its own accord.