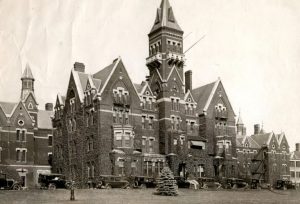 In December 2006 a 139 year old Gothic asylum was demolished to make way for a 497 unit apartment complex. The facility was not only one of the clearest examples of the Kirkbride Plan, but it had since even before its closure in 1989 been considered a location of exceptional paranormal phenomenon.

In the real world the demolition may be a tragedy, but it’s not all bad as a taste of the facility can still be found in Batman’s Arkham Asylum. Welcome to Danvers State Hospital…

Arkham Asylum, the setting for one of the bestselling Batman video games took creepiness to entirely new levels, pushed to the point where it was practically a caricature of a haunted asylum, but aside from Batman and the Joker, it’s not that far from reality.

Without knowing it, the producers of Arkham Asylum had almost entirely based the facility on a very real location. Danvers State Hospital was the inspiration for the notorious horror writer and occultist, H. P. Lovecraft’s Arkham Sanitarium in his 1933 story ‘The Thing on the Doorstep’, and the Arkham Asylum of Batman fame is an identical replica.

Before its demolition Danvers was a sprawling facility covering over seventy acres of land, complete with the Gothic courtyards, gardens, and even the labyrinth of underground tunnels connecting the several buildings.

Between its closure and demolition Danvers State Hospital became a favourite amongst ghost hunters and urban explorers, some leaving it in not quite the condition they found it. This only added to the similarities.

Phenomenon of the paranormal sort within Danvers State Hospital can range from well-lit rooms where there is no electricity to loud noises as though somebody just pushed over a brick wall on the floor above you.

Some witnesses have reported hearing eerie whispers pleading for help, begging to “keep her away”. The “her” has also been reported on numerous occasions – a slender scowling woman dressed in Victoria era clothing. She has been known to appear randomly, standing ominously in dark hallways, but more terrifying is her habit of charging at those that witness her.

Despite that, the victims having blamed it on the Victorian woman who had charged at them, there had been so many illnesses amongst urban explorers and other enthusiasts illegally touring the facility that an unknown toxin was listed amongst the defences for the destruction of the facility during the 2006 legal proceedings.

The toxin itself was never identified, but Danvers State Hospital’s long history as a medical facility in a period when science was less than appropriate coupled with the numerous current day ailments coming from the facility was enough to warrant the defence.

Over the years Danvers has been given numerous nicknames including: The Castle on the Hill, The Palace on the Hill, or The Haunted Castle – but one such nickname stands out as a hint to its early history, The Witches’ Castle.

Danvers State Hospital is immediately outside of Salem Massachusetts where twenty-nine people were convicted of the capital felony of witchcraft. Contrary to popular belief “witches” were not burned in Salem, this was for the most part a European phenomenon.

In Salem they hanged them “on the hill”. The same hill where Danvers State Hospital was built and where there are now 497 apartments.

If the entity of the witch hung around for three hundred years, it’s fairly unlikely she’s leaving just because there are condos there now, so if you ever thought perhaps you wanted to live with the 320 year old poltergeist of a witch, these may be the apartments for you.