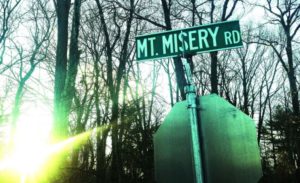 Mount Misery is a vast 854 acre wooded area in Huntington, NY. It’s name doesn’t derive from the many legends attached to the property.

In 1653, local Indians sold the land to the settlers. The Indians sold them what they believed to be cursed land. They claimed evil spirits roamed the land. There were rumors of strange lights and sightings of a “man beast” or hell hound like creature with glowing red eyes.

The settlers soon realized the land was no good for growing crops. It was used mainly as a trade route. The rough terrain and steep hill made it difficult for wagons to pass. Thus, it became known as Mount Misery.

For anyone familiar with the Long Island Mary’s Grave legends, you will be surprised to note that Mount Misery too has its Mary and its own haunted cemetery. This is also intertwined with the Lady in White tales. All over Long Island there are stories of a woman or child named Mary murdered in tortuous ways and buried but not at rest.

Legends say she was walking home and was killed on the roadside and now she wanders these dark and lonely roads to protect other women from the same fate. Mary is also reported to be in white when she is sighted. Many drivers have noted seeing her both at the cemetery and along the roadside. 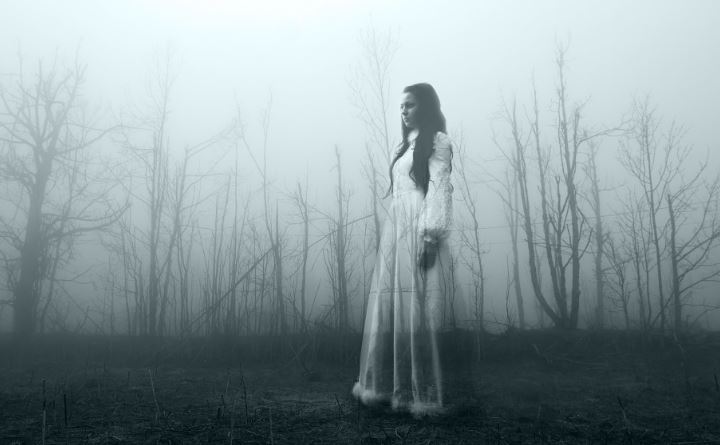 In 1840, a hospital was built for the insane, but not long after, a fire burned it down to the foundation, killing many of the patients. The hospital was rebuilt about 15 years later. New patients and staff began reporting the smell of something burning and unexplained screams heard during the night. The new hospital burned down 5 months after being built.

Mount Misery is believed to be rather paranormal active. There have been sightings of a lady in white. No one knows for sure who this spirit may be but there’s speculation she might have been a patient in the mental hospital.

Actually, some believe she caused one of the fires and was among the patients who died in the fire. She is seen walking alongside the road and even likes jumping in front of cars.

There also tales of an elderly male spirit who carries around a wicker basket full of decapitated heads. Some witnesses traveling down Sweet Hollow Road have encountered the spirit of a fallen police officer.

He was shot in the head and killed during a routine traffic stop. Even after death, he still pulls cars over. You don’t notice anything wrong until you get a peek at what is missing, the back of his head.

There are stories of a girl who was hit and killed by a passing car while trying to fix a flat in the 1970s. This supposedly took place directly under the Northern State overpass. They say if you park your car there at night, shut off the lights, and put it in neutral, she’ll push your car until you clear the overpass.

Witnesses have reported seeing children hanging from the Northern State Overpass on occasion. Children believed to have committed suicide there and may not have been the only one. There is a story of a young girl who was supposedly attending a nearby horse riding camp.

She was allegedly molested by the counselors. When she told her father, he didn’t believe her. In a rage, she killed them all and then hung herself from the bridge.

Spirits are not the only things wandering the mount. There have also been sightings of UFOs in the area and strange visits from men in black to the locals after each sighting.

Tales about the Mount Misery area have been passed on from person to person for over 100 years, so it stands to reason that the tales will change and grow.