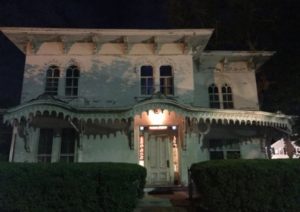 All Margaret wanted was a nice home where she could raise her small daughter. An ad for a colonial house seemed like a dream come true, but upon stepping inside, it felt more like a nightmare – a nightmare that didn’t quite end when she walked away. This is Margaret’s story…

I was living in Houston, Texas, and my daughter was only two years old. I wanted a house very badly, but couldn’t afford one. That did not stop me from looking at the Sunday paper, however, and dreaming.

One Sunday, I read an ad for a house for rent: a two-story colonial with a large yard, mature trees, and a garden. The best part was it was only fifty dollars more than I was paying for my apartment. I couldn’t resist. I called the number listed and the lady told me that she and her husband owned a plant nursery not far from the house. She said if I drove to the nursery, I could follow her to the house.

I wasted no time in getting dressed and heading over. It was a bright day in June, the sun was shining, the birds singing, the grass was green, and there was just a hint of a breeze. It was the perfect day to find a home.

I arrived at the nursery and met the lady and her husband. They were wonderful people. If I were going to have landlords, these were the people I wanted to have. They told me the house needed some painting, and if I wanted it they would let me pick the colors.

Also, if I wanted to do anything to the yard, I could come to the nursery and pick out anything I wanted free of charge. They would also let me have the third month rent free so that I could make some improvements I might want to do.

It seemed too good to be true. I followed the woman to the house. Sure enough, it was a large white colonial with black shutters and gigantic oaks in the front yard. As I climbed out of the car, I caught just a glimpse of what appeared to be a garden gate on the side. There was no grass in the yard, maybe because there was too much shade, but I could overlook that. I had a full nursery where I could choose shade-loving plants.

The woman opened the front door and went inside. I took a step to follow her and froze. A chill ran through me. Goosebumps broke out on my arms and the hair stood up on the back of my neck. Even my breath caught in my throat. Everything in me said, Do not go into this house…, but that was ridiculous, wasn’t it? I had come all this way. The lady was inside waiting for me. How could I explain it? I had to go in.

I pulled myself together and tried again with the same results. Something deep within me rebelled at the idea of going inside. I realized I was afraid – very afraid. I could hear the lady saying something to me from inside, but I couldn’t make out the words. I couldn’t just stand here outside the threshold, I had to go in. I didn’t want to, but I couldn’t come up with a logical reason to leave. 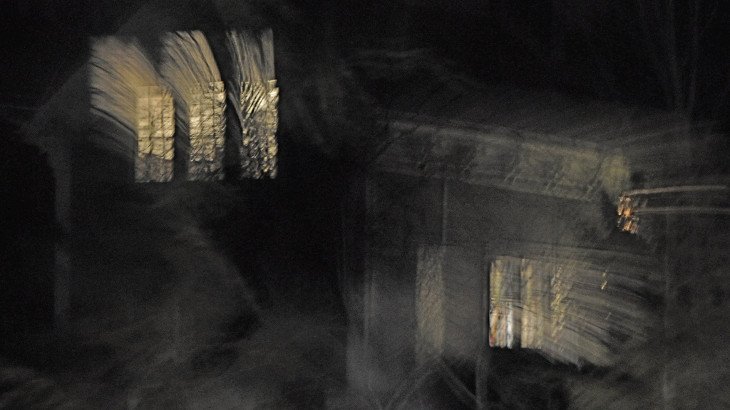 I gathered my courage and stepped inside. The first thing I noticed was how dark the house was. Outside it was bright and cheerful, but inside there was no light. I couldn’t even see the walls. I could barely make out the vague shape of the woman who had led me here.

She knew the house and flicked on some lights, but it hardly made a difference. It was as if the house sucked up all the light, releasing only shadows and dark corners. I couldn’t understand it… the windows were huge. Where was the light?

Add to this the feeling of being watched. I felt there was something there quietly watching us. She showed me the living room and the kitchen, for all the good it did. It was as if I were going blind and couldn’t force my eyes to adjust. She showed me the backyard, which did have grass and another large tree. I was puzzled. I could see the light outside and couldn’t imagine why it did not pierce the darkness inside.

There was a shed in the yard, and she explained to me that the man who lived here before had left unexpectedly without any notice and had left all his clothes and furniture behind. She told me that she and her husband did not know what to do with his things and they didn’t want to throw them away in case he returned for them.

They had put everything in the shed. She told me not to worry, that they had changed the locks on the house, and if he didn’t come back in a couple of months, they would empty the shed.

THE SYMBOLS ON THE FLOOR

She showed me the little gated garden I had glimpsed from the front yard. I liked the garden and could imagine planting it with my daughter, yet I could not see us living here. She led me into the dining room, complaining the entire time that she couldn’t understand why anyone would paint the walls black, not only the walls but the windows as well. The former tenant also had drawn some weird symbols on the floor in some sort of luminescent paint. She had no idea what they were.

I did. I have never been a devil worshiper, of course, but I have seen enough movies to know what a pentagram looks like. It was beginning to make a little sense.

She took me upstairs, a bare blub barely brightening the way. It lit perhaps two steps before losing to the darkness. As I followed her up the stairs, I kept looking behind me. I was certain something was there – something that was watching me on its best behavior because it wanted me to move in. Something frightening that was not in the dark, but was the dark.

She showed me two equally dark bedrooms, and when she opened the door to one small room no bigger than a large walk-in closet, I had to blink. It was filled with light! A charming little pink room that could be my daughter’s, if not for the fact that I kept imagining the two of us huddled in this room afraid to leave and venture out into the rest of the house. I thought of me clutching her in the middle of the night, staring at the doorknob, watching it turn. The image was a little too real.

I left the house. Needless to say, I didn’t rent it, and the story might have ended there as the amusing tale of an active imagination were it not for a dreary rainy day in November five months later.

THE THING IN THE ROAD

I was taking a friend to work at a bar in small suburb just outside Houston. It was a cloudy, drizzly evening shortly before Thanksgiving. The days were getting shorter, and even though it was not quite six-thirty it was already dark. I had dropped him off and I was driving home with the radio playing, planning for the holiday.

I was on a little blacktop road that was barely large enough for two cars to pass. This nondescript road connects Houston to this little suburb, so it is very busy during rush hour. The headlights of workers heading home to the burbs rushed toward me like an endless string of pearls. Almost no one was going in my direction.

Suddenly, from out of nowhere, something stepped in front of my car with outstretched arms. Something huge. Eight or nine feet tall with glowing red eyes. I swerved to miss it. My worst nightmare is to hit a person while I am driving. My mind told me it couldn’t be a person, but I ignored it. It must be a person. I cannot miss it… it is too close.

I closed my eyes for the terrible bone-cracking impact, but there was nothing. I waited for the bump of the wheels bouncing over the body… but again nothing. The tires caught the mud and wet grass on the side of the road and the car spun out of control and was heading for a wide oak tree. I prayed for help and managed to regain control of the car in just enough time to miss the tree by the skin of my teeth.

I got back on the road and turned into a convenience store just up the road. I was shaking. Did I really see what I just saw? It had both arms outstretched, the fingers spread wide. What passed for hair were actually five pointed horns standing out on its head in the same way a child draws the sun. Its eyes were glowing red slits. It couldn’t be. It had to be a person, and if it were a person, he could be lying in a ditch on the side of the road.

WHERE IT CAME FROM

I got out of the car in the drizzle and starting walking down the road, retracing the way I had come. It was uncomfortably cold and wet, but I had to check. As I walked, I noticed that none of the cars had slowed. No one was avoiding anything in the road. I looked in the ditch past the wet, drooping leaves. Nothing.

I came to the tree I had nearly hit. I could see the tire tracks in the mud, but no body… no nothing. Confused, I stood there for a moment and was about to head back to my car when I saw, directly across the road from where I had nearly hit the thing I saw, was the house I had seen in June!

Whatever it was had come from that house! It somehow knew that I was there. And since I had not moved in, it had tried one last time to take me. It had tried to kill me! The guy who had lived there had dabbled in some form of Satanism and conjured up something he couldn’t get rid of and he had left… or worse, he was still there, somewhere within its walls.

The house was still empty that rainy night. No one had moved it. I fear for anyone who does. I never saw it again. I would never go that way. I told a few people this story, but not many. One asked if I would take him there, but I refused. I told him I’d give him directions, but I would never go there.