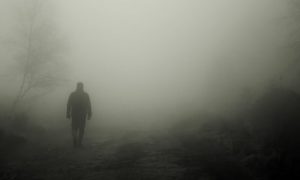 I was born in 1956 in Bessemer Alabama. I remember when I was 10, and my cousin Keith was 7. My maternal PaPa and my Uncle Horace (his brother) carried my cousin and me to camp along the banks of Shades Creek.

This creek was about 15 to 20 feet wide in most places and was deep and cold. It was, and still is located in a valley between two hills several miles from the community of MCalla, where I grew up.

There were catfish in the waters and small bass called “redeye” bass. My Papa and uncle Horace liked to camp there on some weekends and try their hand at catching those fish. Rare was the occasion that they would venture to take along two young boys and think they were going to catch fish.

My cousin and I were a little rambunctious, to say the least.

After darkness settled in and a fire was built, my Papa asked his brother if he oughta “tell them boys about the Moonshine Ghosts” that haunted the waters and the surrounding area where we were camped.

In Alabama in the middle of August, when it’s sweltering with humidity during the daytime, nevertheless the nights in the woods, especially around a flowing creek like Shades Creek, resulted in a chill in the air, and the fire provided a welcome warmth from that chill. But when my Papa said those words, there was a new and different kind of chill in the air.

Uncle Horace began… “Boys, many years ago, there were two old ‘fellers that moved down here from up north aways and they brought with them their wives.

They were brothers, these two ‘fellers, and they came down here looking to work in the farming trade. Some say they were machinists, learned the craft in the mills of the north, and some say they were just plain stupid folks looking for an easy dollar. But that doesn’t matter. What they did find out was that work wasn’t any easier to get here that it was where they came from.

They settled on some land that was leased to them about two miles up this creek and tried their hand at farming the fields on that property.

Corn and taters were good to grow, didn’t take a lot of tending’

and so they planted and hoped to make a crop that would sell and get them some money to build a second house on the property for the land-owner and then move into it. The corn they planted did really well. Them two ‘fellers decided that selling whiskey would make more money faster, and there was a lot of corn to deal with anyway. Just right up this here creek bank about a mile is where they decided to get a still built to make corn whiskey with. Now these two ‘fellers were thinking that they would do something a little different about the still and making whiskey.

There was always the chance that someone, especially the law, would discover the still. So what they did was, they made a second still that would be there on stand-by just in case the first one was found and destroyed by a revenuer or whoever.”

“Well, the corn whiskey making’ business turned out to be a very profitable one for these two ‘fellers and they decided it would be worth the risk to have both stills going at the same time and double up on their efforts and sell twice as much whiskey.

So that’s what they did. The stills were across the creek from each other and were about a hundred feet from where the creeks edge was at that time on either side” “One night they were making their whiskey and they had a narrow footbridge built across the creek so they could get back and forth from one still to the other. It came up a storm and they kept on making whiskey.

They weren’t worried about the lightning getting to them ’cause they were down in this valley next to the creek. And there were shelters built over the stills to keep the fires outta the rain and the wood dry. That little old footbridge was narrow and they were on it following one another carrying some more wood to the second still.

The waters were swelled up and running fast in the creek from the rain. Then the bridge broke in the middle and both of them ‘fellers fell in the waters of Shades Creek and were swept away by the waters and were never heard from again.”

My cousin and I thought that was pretty scary, but what really scared us and caused us to forever remember that night was what Uncle Horace told us next…

“That ain’t all there is about that story..” he said. “A year later there was a couple of folks fishing’ down here about where we are and it was getting dark and they suddenly felt a coldness in the air that came over them.

A lot colder than what it should have been for this time of year.

It was a cold that chilled them right down into their bones and caused them to shudder. And they both agreed that there was the smell of something cooking in the air. Now come down here to the bank of the creek with me and we’ll see if it still happens.”

We followed him to the creek’s edge and looked into that dark water thinking that we were about to see the faces of those two moonshiners in its depths peering back at us. But that wasn’t it at all.

What Uncle Horace had us do, was to sit down at the creek’s edge and wait. In a few minutes that seemed like us to be an eternity, we all of a sudden could see a dense, thick and very obvious cloud of mist making its way down the waters of that creek. We were petrified. We sat there with Uncle Horace’s huge arms around us and felt ourselves become engulfed with this mist. It was cold.

It felt as though the temperature had dropped to near freezing. It was real! There was no imagining this sensation. We couldn’t see the other side of the creek even with the moonlight glowing as we had a few moments before the mist surrounded us. And then there was the smell. Uncle Horace said “There it is, boys. Take a long deep breath of that smell and tell me what you think it is..”

We knew what that smell was. It was the smell of soured corn and oats being cooked. A real pungent, almost overwhelming odor.

And we looked at each other and without speaking, knew how good it was to have Uncle Horace with us or we would have been terrified.

He didn’t seem scared and acted as though it was something he’d experienced before. A few moments passed, and with them, the mist went down the creek and out of sight. The moonlight again lit the opposite bank of the creek.

I’ve never been there again since that night. I don’t know if my cousin has either. I doubt it. He continues to live in the area where we grew up in Alabama, but I don’t see or hear from him these days.

I now live in Idaho and probably will never visit that place again.

But it was real, and I don’t have to this day, any explanation of those physical things that happened that night. The place may even be part of a subdivision now, like so many other places that used to be “away” from the main area.