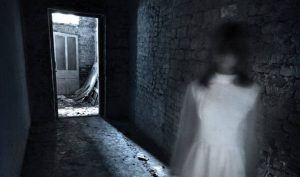 It was the middle of the seventh lunar month on the Chinese calendar, the Festival of Ghosts. Oddly enough, my school organized a parents-teacher meeting that night to discuss some matters pertaining to the school.

That night, the parents were inside the hall while a bunch of my friends and I were loitering around the school compound. All six of us, Joe, Brad, Jenny, Krissy, my sister and I, sat down in the middle of the basketball court playing a game of dare. We were having lots of fun until Krissy dared Brad to go to a hidden place behind the school and come back.

My school is big and old. It has a lot of hidden places that only a few students and teachers know of. One of our favorite spot is this sloppy open area at the back of the school. We nicknamed it “hao san”, literally “back-hill”. We often go there to have a little picnic during lunch hour but we had never been near it at night. There were stories from the seniors that a girl hanged herself there in the past and had since haunted the place at night. To go there, one has to go through a series of steps and through a gate. The place is not lit at night and on a moonless night like that night, one could easily get lost inside.

Anyway, Brad chickened out, saying that the story was true and that he won’t go up. However, my sister suggested that we tie ourselves to one another with a long rope and got up there together. It sounded like a good idea. After all, not many believed in the story. So, we found a rope and we were all set to venture into “hao san” in the dark.

We walked carefully up the stairs. No doubt all of us were had our fears but nobody dared to say anything. It was so dark we could hardly see each other. After passing the gate, I realized the knot of the rope was untied and I’ve lost everyone! I was really scared by then. I didn’t know what to do but know better than to venture further into the dark. So, I quickly turned around and headed back down. Just as I was about to leave, I heard a voice saying, going so soon? The voice was so eerie and spooky. I knew it couldn’t have been my friends so I just ignored it and climbed down the stairs. While descending the stairs, I could sense a strong smell of burning candles.

I ran to the basketball court hoping that the rest would be there waiting for me. But there was no one there. I was too petrified to go back into “hao san” to look for them so I decided to wait for them there.

A few minutes past before Joe came back followed by my sister, Brad and Jenny. Apparently, everyone was separated once we passed the gate and no one knew where Krissy was.

We were worried about Krissy. We decided to go near the stairs and shout for her. We were too afraid to go inside again. Krissy only showed herself almost an hour later. When she came down, she was so pale and so scared that she was shivering in a state of shock. None of them heard any voices even though everyone smelt the burning candle. Krissy, however, encountered the ghost of the girl who hanged herself there.

Krissy told us her story later.

“We had just passed the gate when I realized I had lost you guys. The rope was like cut and it was totally silent in there. I called out to you all but nobody answered me. I was getting really scared by then. I looked around in the dark and all I could see was a bright red glow near a tree. I didn’t know what to do and I thought you guys might be there. So, I headed towards the light.

“I got to some bushes near a tree but I couldn’t found the source of the red glow in that area. Then, I suddenly felt some water dripping onto my face. I thought it was raining, but when I looked above, I saw a girl hanged to the tree with a noose on her neck and she was staring down at me, smiling an evil grin! The water dripping down on me was actually blood!

“I was so scared I just ran away. I kept turning to look behind and she would always be near. I wasn’t sure if she was chasing me or I just never moved a bit even though I ran with all my might. A short moment later, I think I tripped over something as I remember I fell to the ground and fainted. When I woke up, I heard people calling me from afar. I was hoping it was you guys. I walked towards the noises and soon I came upon the gate. And yes, as I was climbing down the stairs, there was this strong and peculiar smell, like something being burnt….”

Brad interrupted, “It was the smell of candles burning. We all smelt it too but no one saw anything.”

“Anyway, I was too afraid to give it much thought then. You couldn’t imagine how relieved I was to see you all then,” Krissy was clearly terrified.

After that incident, we no longer venture into “hao san”. Nevertheless, we did some research and found out from some teachers the story of the girl who hanged herself there. Apparently, she was pregnant with her boyfriend’s baby. Feeling completely lost and helpless, she hanged herself there one afternoon. Some three months later, her boyfriend was killed in a car crash. His face bore a horrified look; his eyes wide opened as if he had seen a ghost…

Story from Woosh of Hong Kong