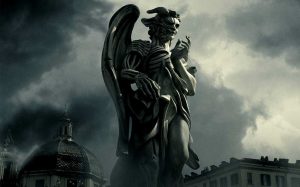 Throughout history and geography, humans have believed in the presence of evil beings that roamed the earth. These malevolent spirits are seen in mythology, legends, occultism, and religion.

The spread of Christianity throughout the world deepened the belief and expanse of demons, but many cultures have their own form of evil supernatural creatures that are considered even worse than the countless demons of Abrahamic traditions—meaning Christianity, Islam, and Judaism. Looking into all the demons that invade the human realm though, some stand out as scarier or more evil than others.

Here are the top ten malevolent spirits from different religions and various cultures around the world that humans need to keep away from if they want to avoid the terror these demons wreak upon humanity.

In the Western World, djinn are known more commonly as genies. They are supernatural creatures that live on a parallel plane that is similar to that of humans. According to the Qur’an, djinn have free will just like mankind—meaning they can be good or evil.

However, when the djinn choose the path of evil and destruction, they are certainly fearsome to behold. Their physical bodies are composed of a smokeless flame. Iblis was a djinn who was basically the Islamic equivalent of Lucifer. After the heavenly rebellion which he led, Iblis was granted a pardon to live on Earth and lead mankind astray until Judgment Day.

The Furies are actually creatures from Greco-Roman mythology. The Romans knew them at the Furies while the Greeks called them the Erinyes. They were female deities of the Underworld who personified vengeance and the anger of humans who had died prematurely.

They roam the Earth to punish people who have sworn a false oath and to give retribution to wrongfully murdered humans. Their numbers can vary but they generally attack in groups of three. Their appearance is always horrific though with eyes that dripped with blood and generally wings of a bat to help them fly around to complete their work.

An incubus is a demon that is related to European folklore more than any particular religion. Its name comes from the Latin word “incubo” which can be literally translated as “nightmare.” These demons are always male in form and like to lie on sleeping women in order to have sex with them.

Most of the time they do this in order to make the woman pregnant so that they can be a father to a child; however, all of the legends hold that repeated interactions between an incubus and a sleeping female will result in severe deterioration in the woman’s health or even eventual death.

Raiju is a legendary creature in Japanese mythology. Its name translates to “thunder beast” in English. Its name links directly to the creature’s form. Raiju has a body composed of either fire or lightning. However the ultimate shape of the lightning or fire can vary from a cat to a monkey or even a blue wolf wrapped in lightning.

During thunderstorms, Raiju becomes agitated and starts leaping on top of trees and buildings. The demon also likes to rest in the navels of sleeping humans. The Shinto god of lightning, Raijin, then has to shoot lightning at the demon to wake him up which generally harms the human as well. People try to avoid this incident by sleeping on their stomachs during a storm.

Succubus demons are the female counterpart to the incubus. They come to the beds of human men at night to seduce the men in their dreams. Many times succubi enjoy seducing monks. They have to draw the sexual energy from men in order to sustain themselves almost like a vampire needing human blood.

In the past, they are generally depicted as quite frightening with wings and a snake-like tail. However, modern times have changed their appearance to look like a beautiful enchantress so that that can more easily seduce sleeping men to gain their energy.

Both the Assyrians and Babylonians knew the king of the wind demons was Pazuzu. He represents the southwestern wind that bears both droughts and storms.

Pazuzu was known for bringing locust during the rainy season then famine during the dry seasons. He is often depicted with a combination of human parts and animal parts—most commonly with a human body, a lion’s head, and two pairs of wings.

His physical appearance is generally that of a soldier upon a red horse wearing red clothes and a golden crown. Occasionally, he will have red skin as well. He can be conjured by mortals though if the human is not wearing a silver ring that is presented to Berith’s face the demon will torture the human into madness before killing him.

The banshee is a spirit from Ireland. Its name comes from “bean sidhe,” which means “woman of the fairy mounds” in English. This spirit is always female, even in the Scottish tradition. She is considered to be a omen of death or a messenger from the Otherworld.

The banshee relays these foretellings of death by keening loudly on the dark moors at night. Her sounds of mourning are a cross between a scream and a moan, causing chills of fear to travel along the spine of any human close enough to hear her. Her looks can vary though. Some stories tell of her being a frightening hag that is the epitome of ugliness while others say that she can appear as a breath taking beautiful woman. The important fact to remember though is that hearing her screams are actually a warning of coming death for you or a close loved one.

Pishachas are demons seen in Hindu mythology. They are said to be flesh eating demons that cremation grounds and hide in dark places. While they have the power to assume different forms or even become invisible, their natural appearance is quite disturbing as they have a dark complexion that shows off their bulging veins supplemented with large, protruding red eyes.

Pishachas are also known to spiritually possess humans from time to time which causes the victim to suffer an assortment of abnormalities and even maladies to their physical body. Insanity is usually the most common affliction from these creatures to the human they are possessing.

Abaddon is a demon from the Christian tradition. He can also go by the name of Apollyon in Greek which translates to “The Destroyer.” He is seen in the biblical book Revelations, written by St. John. The original Hebrew, Abaddon, literally comes to mean “place of destruction” but in the Christian scriptures describe him as an individual person. In those descriptions he is known as the king of the bottomless pit that holds lost souls and commander of a viscous plague of locusts. In all other works outside of the Christian Bible he is identified as the angel of destruction, leader of the Apocalypse, and one of the chief demons of the underworld that is almost equal to Satan himself.