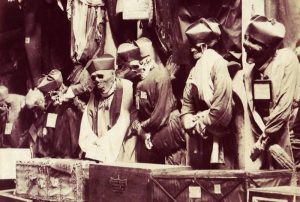 The Capuchin Catacombs of Palermo are burial catacombs in Palermo, Sicily, southern Italy. Today they provide a somewhat macabre tourist attraction as well as being an extraordinary historical record. Four long limestone corridors underneath the Capuchin Church hold about 8,000 mummies, lying in repose or hung from hooks by their necks and feet and wearing their best clothes.

The Capuchin Catacombs of Palermo were constructed when the monastery outgrew its original cemetery in the 16th century and monks began to excavate crypts below it. After the death of Silvestro of Gubbio in 1599, a famous 16th-century monk, they mummified his remains and placed his body in the catacombs.

Originally the catacombs were intended only for the dead friars. However, in the following centuries, it became a status symbol to be entombed into the Capuchin catacombs. In their wills, local people would ask to be preserved in certain clothes or even to have their clothes changed at regular intervals. Priests wore their clerical vestments, others were clothed according to contemporary fashion. Relatives would visit to pray for the deceased and also to maintain the body in presentable condition.

The catacombs were maintained through the donations of the relatives of the deceased. Each new body was placed in a temporary niche and later placed into a more permanent place. As long as the contributions continued, the body remained in its proper place but when the relatives did not send money anymore, the body was put aside on a shelf until they resumed payment.
The last friar interred into the catacombs was Brother Riccardo in 1871 but other famous people were still interred.

The catacombs were officially closed in 1880 but tourists continued to visit. The last burials are from the 1920s. One of the very last to be interred was Rosalia Lombardo, then nearly two years old, whose body is still remarkably intact, preserved with a procedure that was lost for decades, but was recently rediscovered. The embalming procedure was performed by Professor Alfredo Salafia.

The catacombs contain about 8000 corpses and 1252 mummies and the halls are divided into categories – Men, Women, Virgins, Children, Priests, Monks, and Professionals. Some bodies are better preserved than others. Some are set in poses, for example, two children are sitting together in a rocking chair. The coffins were accessible to the families of the deceased so that on certain days the family could visit and hold the hands of the deceased.

The catacombs are open to the public but the taking photographs inside is supposedly prohibited. However, the bodies have been shown on a number of television programmes over the decades. Iron grills have been installed to prevent tourists from tampering or posing with the corpses.