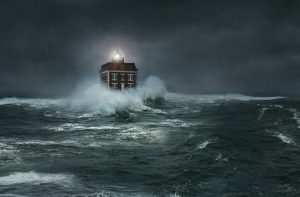 According to accounts Connecticut’s New London Ledge Lighthouse’s haunter is believed to have killed himself,. Since the tragedy, there have been paranormal phenomena.

Historic New London Ledge Lighthouse’s supernatural events have been witnessed by members of the US Coast Guard and civilians. Some hauntings are created by tragedy, in this case, a suicide. The ensuing phenomena can be manifested in more than one way.

Sailors and local residents pleaded for over one hundred and fifty years for a lighthouse to be built at the mouth of the Thames River and New London’s harbor.

In 1794, the Connecticut Legislature mandated that four buoys be placed in the harbor, but they proved to be inadequate. The New London Harbor Lighthouse was completed onshore in 1801, but it failed to mark offshore ledges.

Mariners and citizens petitioned for an offshore lighthouse for years to no avail. Finally, the Lighthouse Board detailed the dangers of maritime traffic to Congress, requesting funds to build a lighthouse.

The southwest ledge was chosen as the site. The New London Ledge Lighthouse began operation in 1909. New London

There are three versions about the heartbreak that caused the haunting. According to the first one, John Randolph was the lighthouse keeper. His wife was lonely and flirted with local fishermen and sailors.

One day, when Randolph went to shore for supplies, she ran away with an unidentified ferry boat captain. When her husband discovered she was missing, he slit his throat and fell off the sixty-five foot tower.

According to the second version, an unnamed lighthouse keeper’s wife ran away with the captain of one of the Block Island ferries. Her husband was distraught and jumped to his death onto the rocks around the lighthouse.

The last is that the keeper had a bitter argument with his girlfriend and returned to the lighthouse where he jumped to his death. All agree that his death led to the subsequent haunting.

Until 1987, New London Ledge was the last remaining manned lighthouse on Long Island Sound. During its last years of this type of operation, a four-man Coast Guard crew was usually on duty for eighteen month tours.

There was an entry in the log that called the lighthouse grounds a rock of lingering torture and Ernie’s realm.

Doors opened and closed, footsteps, knockings and other eerie sounds were heard, objects in locked desk drawers were rearranged, a fishy odor permeated the structure, cold spots accompanied the feeling that someone or something was present, floors and windows were washed by unseen hands, tools disappeared and reappeared, televisions turned themselves off and on and covers were pulled off of beds. Only women and children were able to see Ernie.

In 1981, six years before the lighthouse was unmanned, psychics Nancy and Roger Pile visited the lighthouse. They claimed Ernie was an earthbound spirit because of his traumatic death and remained to tend to the lighthouse.

The Piles allege they gave him permission to leave the earthly plane, but allowed him to visit his beloved lighthouse.

There has been no further information to support or deny this claim.