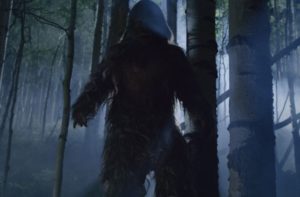 Countless numbers of researchers have devoted years of their lives trying to discover the true identity of Bigfoot, so far they have been unsuccessful.

Bigfoot has been identified as many things, including a hoax, shape shifter, unknown species of primate, an extinct prehistoric ape, and an alien. A new theory, and one that has considerable merit, identifies Bigfoot as a, once thought extinct, hominid, known as Paranthropus.

Paranthropus was a bipedal hominid that appeared about 2.5 million years ago. They existed at the same time as Australopithecus and are suspected to be an off shoot of this line and as such share many of the same traits, with this species such as being bipedal and being entirely covered with hair.

Although sharing many traits, there were also major differences between the two species.

Australopithecus stood roughly 3 feet tall, whereas Paranthropus is thought to have been closer to 5 feet in height; this would have made it a giant in its time. Paranthropus had a more robust skull, larger back teeth, a flatter face, and a more muscular physique.

Paranathropus also appears to have possessed a sizeable sagittal crest. The large teeth combined with the large sagittal crest would have made it possible to eat very tough roots, tubers, as well as a wide variety of plant foods.

In contrast to the Australopithecus, who preferred open grasslands, the Paranthropus appears to have preferred dwelling in the forested regions.

The Australopithecus went on to evolve into modern man whereas the Paranathropus is thought to have become extinct about one million years ago. This theory of extinction is now in question.

Why the Paranthropus and Bigfoot are physically alike

One of the first facts we need to take into consideration is the walking style of the Bigfoot. The Patterson – Gimlin film, of 1967, is considered to be the best piece of evidence, to date, of the existence of Bigfoot.

Patterson died of cancer in 1972 and “maintained right to the end that the creature on the film was real”. Patterson’s friend, Gimlin, has always denied being involved in any part of a hoax with Patterson.

In this film, Bigfoot can be seen walking with a definite wobble or swivel movement at the leg (below is the stabilized version of the video).

In a documentary, titled Sasquatch meets Science, the gait, of the specimen in the Patterson-Gimlin film, was analyzed with computer software. The analysis showed an inward wobble with each step.

While we are on the subject of walking style, let us examine the mode of locomotion of the Bigfoot, while the Bigfoot is mainly observed walking on two legs, there have been instances when it has been seen walking on four legs.

The Paranathropus, Australopithecines, and the Homo habilis genus all had longer arms in comparison to leg length. This trait made it possible to maneuver on all fours as well as two.

Arm length in proportion to leg length did not appear until the Homo erectus species. While this trait is by no means conclusive, it does show a relationship between Bigfoot and the Paranthropus.

The actual construction of Bigfoot’s foot is very close to the construction of the Paranthropus foot. According to Paleontologist, Dr. Jeff Meldrum, alleged tracks of the Bigfoot do not show a longitudinal arch in their feet which causes a curvature to the middle and end of the foot.

Bigfoot must have a high degree of mid foot flexibility to compensate for this. This foot construction is consistent with the Paranthropus and Austrlopicecus genus. The longitudinal arch did not develop until the genus Homo habilis.

One of the most consistent facts about all Bigfoot sightings is the degree of hairiness. Bigfoot is always described as being completely covered with hair.

Paranthropus as well as all hominids predating it were also covered with hair. The hairlessness, of later species, did not develop until the arrival of the Homo habilis and the development of persistence hunting.

The skull of the Paranthropus demonstrates that it had many facial features consistent with Bigfoot. Bigfoot is usually reported having a flat face and a somewhat conical shaped head.

The skull of the Paranathropus shows a massive sagittal crest; later species of hominids do not have this. A sagittal crest is a bony ridge running lengthwise across the middle of the skull.

The skull of the Paranathropus also shows a thick boney ridge over the eyes, commonly known as the brow ridge. The conical shaped head and the heavy brow ridge are both traits consistent with the face of the Bigfoot.

The Paranthropus and Bigfoot had a similar culture

Homo habilis and Homo erectus made use of all of these. Although there is some evidence to suggest Paranathropus may have used very crude stone tools, overall it did not make use of any material culture and lived much the same way as Bigfoot now lives.

Although the true identity of Bigfoot is still unknown, as a seasoned researcher, I feel that the most valid candidate for its identity is the Paranthropus.