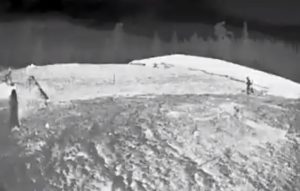 Washington authorities recorded footage of a mysterious figure trudging through the snow near Snoqualmie Pass.

We reported a few days ago that the Washington State Transportation Department had shot the photo of a large figure walking through the snow near some trees at Sherman Pass.

Now another of the official webcams in the department has picked up something odd-this time on the wildlife overcrossing on I-90 east of Snoqualmie Pass.

Nevertheless, while the previous sighting consisted of only one still frame, this supposed Bigfoot was caught on full-motion video.

At some point in the video, the Bigfoot briefly looks back, which looks a bit like the infamous Patterson-Gimlin Yeti, who was captured on camera in Bluff Creek, Northern California, in 1967.

So might this be evidence of the legendary cryptid or is it just a man walking along? Below you can check out the video by yourself.

I think Bigfoot is making the rounds across our mountain passes. @wsdot_east showed him on Sherman Pass the other day and now he is on the wildlife overcrossing on I-90 just east of Snoqualmie Pass. #doyoubelieve pic.twitter.com/gysrH5wG2r