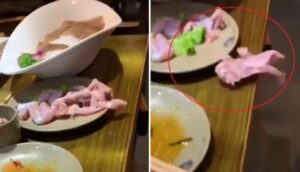 The scary moment with the “zombie” chicken was filmed in a restaurant. A chicken breast on a plate in a restaurant suddenly came to life and ran off the dinner table. And this moment was filmed.

The footage shows raw chicken, which is on the plate. Suddenly she starts to move and “runs away” from the plate, and then falls on the ground.

In the comments, users shared their versions of how the chicken literally came to life on the plate.

One of the viewers suggested that this was due to the freshness of the meat itself – the chicken’s muscles could reflexively move on. Others just joked: “If my food runs away, then I should run.” Many simply expressed their shock and bewilderment.

What are your versions of the horror escape?