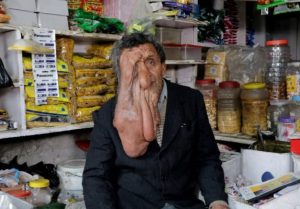 This Indian man is constantly being pointed at because of a rare condition that makes his face look like it’s melting. But, nevertheless, he says that those around him love and respect him.

“People laugh at me and call me different names, but I don’t worry about them,” says 52-year-old Govardhan Das.

Das owns a small shop in Punjab and suffers from neurofibromatosis type 1, a very rare genetic condition characterized by changes in skin color (pigmentation) and tumor growth along nerves in the skin, brain and other parts of the body. 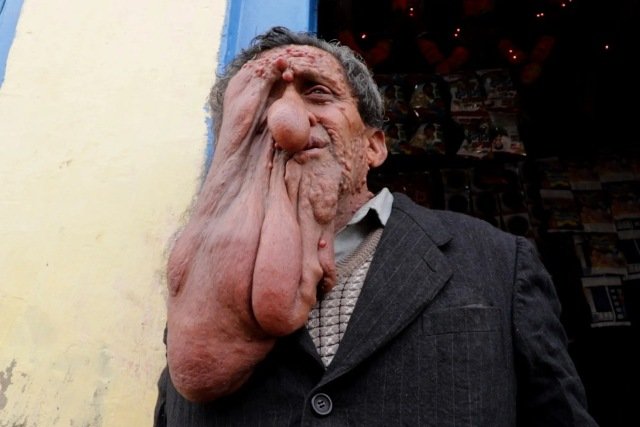 Also known as von Recklinghausen’s disease, this disfiguring facial condition affects about 1 in 3,000 to 4,000 people, but even then such severe growths are very rare. In developed countries, such tumors can be removed at a very early stage of development, but in countries such as India, very advanced conditions occur due to the severe poverty of a part of the population.

Das did not show signs of neurofibromatosis until he was in his 20s, when caramel-like tumors began to grow on his face, predominantly affecting the right side.

Over the next three decades, massive tumors grew on his face to the point where he lost his right ear, eye, and half of his mouth, and his nose became severely swollen.

Das’ problems are not just cosmetic. As a result of the disease, the man can hardly see and it is very difficult for him to eat and speak. At the same time, he is in constant pain, claiming that his skin especially burns and itches whenever he sweats.

Worst of all, there is no cure for such tumors and they only increase with age. Local doctors reportedly refused to operate on Das, claiming that his tumors are related to the brain and therefore impossible to operate on.

However, the man refuses to let his debilitating illness dictate his lifestyle.

“It’s not comfortable for me to move freely around the market because people stare at me and the children are afraid of me, but my family and my neighbors love and respect me,” he said.