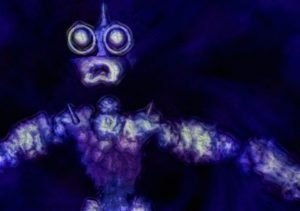 Plasma-based life is hypothetical life based on what is sometimes called the “fourth state of matter”. The possibility of such non-corporeal life is a common theme in science fiction.

However, in September 2003, physicists managed to create plasma clots that can grow, reproduce and communicate, which meets most of the traditional requirements for biological cells.

With no genetic material in their composition, they cannot be called alive, but researchers believe that these curious spheres may offer a radical new explanation for how life began.

Most biologists believe that living cells arose as a result of a complex and long evolution of chemicals, which took millions of years, starting from simple molecules through amino acids, primitive proteins, and finally forming an organized structure.

But if Mircea Sandulovich and his colleagues at Cuza University in Romania are right, then the theory may need to be revised.

They argue that cell-like self-organization can occur in a few microseconds. The researchers studied environmental conditions similar to those that existed on Earth before the dawn of life, when the planet was engulfed in electrical storms that caused plasma to form in the atmosphere.

They inserted two electrodes into a chamber containing a low-temperature plasma of argon, a gas in which some atoms are split into electrons and charged ions. They applied a high voltage to the electrodes, causing an arc of energy to shoot through the gap between them like a miniature lightning bolt.

Sandulovich says that this electrical spark caused a high concentration of ions and electrons on the positively charged electrode, which spontaneously formed spheres.

The amount of energy in the initial spark determined their size and lifespan. Sandulovich managed to grow spheres from a few micrometers to three centimeters in diameter. A clear boundary layer that delimits and separates an object from its environment is one of the four main criteria commonly used to define living cells.

Sandulovich decided to find out if his cells met other criteria: the ability to replicate, transmit information, metabolism and growth.

He found that the spheres could replicate, splitting into two parts. Under the right conditions, they also grew in size, absorbing neutral argon atoms and splitting them into ions and electrons to replenish their boundary layers.

Finally, they could transmit information by emitting electromagnetic energy, causing the atoms inside other spheres to vibrate at a certain frequency.

Spheres are not the only self-organizing systems that meet all these requirements. But they are the first gaseous “cells”. Sandulovich even believes that they may have been the first cells on Earth, originating in electrical storms.

“The emergence of such spheres is probably a prerequisite for biochemical evolution,” he says.

This research raises the intriguing possibility that life throughout the universe may have a much broader basis than is commonly acknowledged.

If life in plasma can arise naturally, then the places of its search can be the outer layers or interiors of stars (the Sun), the magnetospheres of planets, regions of high temperatures, and even ball lightning.