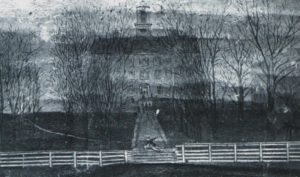 The case of the Humpty Doo Poltergeist is probably the most media covered paranormal case in Australian history. The story began in August of 1997, when Jill Summerville and her partner Dave Clarke, moved into a rental home on McMinns Drive in Humpty Doo, a town located South East of Darwin in Australia’s Northern Territory.

The couple lived happily in their new home and there was no unusual activity experienced at the house. Their peaceful life would end soon after another couple moved in with them in January of 1998, Andrew and Kirsty Agius and their eleven month old daughter Jasmine. The strange events included classic poltergeist phenomena such as objects flying through the air, propelled by an unseen force. The various objects included broken glass, bottles, lids and most ominous, knives. It appeared to be a full-out assault on the homes occupants and the activity would only increase over time.

At one point the couples witnessed gravel and sea shells “raining” down from the ceiling. Then the poltergeist began to communicate with the couples by using “scrabble” tiles to spell out a large array of words. Among the many words were fire, TV, car, help, no TV and troy.

The scrabble words were found at various spots in the Humpty Doo house, and would continue to be part of the paranormal activity for as long as the couples lived in the home. By this point the media had converged on the home, witnessing the wide range of bizarre activity, and, like the homes occupants, appeared to become quite adept at dodging the poltergeist projectiles. Up to that point the couples seemed to just put up with the phenomena, but when they found a trident symbol created with pebbles in the drive way, they decided to ask their local priest for help.

The priest they initially spoke with contacted two of his colleges who went to the Humpty Doo home. The arrival of the priests was immediately met by a violent outburst by the poltergeist. Bibles were ripped from their hands and when later examined were found to have pages missing, pages dealing with the casting out of demons.

At one point, one of the priests was grabbed by the unseen force, his arm bent behind his back as he was forced to the ground. The efforts of the clergy appeared to have no effect and perhaps made things worse. The couples soon came under attack from another entity, a physical one, their landlord.

The landlord, who read about the story in the press and saw coverage on TV news broadcasts, went to the home to see for himself what was going on. What he found was a lot of damage to his property and he immediately went to court to have the tenants evicted. Surprisingly, the couples got a sympathetic judge, who found that they could not be evicted for damaging the property as they were not responsible for the poltergeist haunting.

Despite the legal victory, the two couples could not take any more of the bizarre phenomena and soon moved out of the Humpty Doo home. The landlord had the McMinns Drive home repaired and renovated, the new tenants of the home have not experienced any type of paranormal activity.

One possible explanation for the activity at the Humpty Doo home seems to be revealed in the numerous scrabble words found around the home. The words being Help, Fire, Car, Skin and most of all, Troy. It seems that two months before the poltergeist activity began a friend of the two couples was killed in a horrific manner.

The man, named Troy, was hauling turpentine when he was involved in an accident, the turpentine exploded and Troy died a horrible, fiery death. The possibility that the ghost haunting the McMinns Drive home was the spirit of Troy, seems to be strengthened by the fact that when Troy’s friends moved out of the house, all paranormal activity ceased and has never returned.