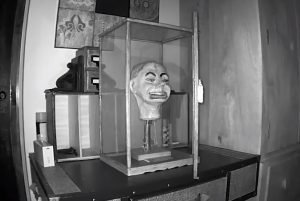 A ventriloquist doll of the Second World War was filmed in the middle of the night, moving his eyes and mouth, reports “AOL News”.

The eerie doll, known as’ Mr Fritz,’ was recently purchased by 48-year-old Liverpool collector Michael Diamond, who got it as a gift from a local military collector back in July.

Little is known about its history other than being made in the 1940s by a U.S. prisoner of war.

In the video recorded in the early morning hours, the doll’s cabinet creeks open on their own and its eyes and mouth can be seen opening and closing slowly without intervention.

“When I first watched the video back I had a weird feeling in my stomach,” he said.

“At least once or twice a week I noticed the door kept coming off its latch. I decided to set up the camera for fun just to see if anything would happen.”

“When something actually did I got a weird feeling in my gut, it’s hard to describe.”

He now hides the doll under the lock and key with a blanket over it.

Evidence of paranormal? Something dragged the dog out the door