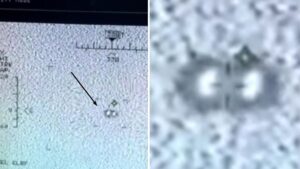 Over the years, many eyewitnesses from the Navy, Air Force, and Coast Guard have reported strange UFO activity off California’s southern coast, especially the area around the islands San Clemente and Catalina and now once again UFO activity has been recorded and this time over Clemente Island, reports ufosightingshotspot.blogspot.com.

FLIR cameras are typically used on military and civilian aircraft, use a thermographic camera that senses infrared radiation.

The helicopter was grounded off of San Clemente Island, California on a 2-week training event. They were doing routine maintenance after the shutdown for all flights when they saw the lights.

There seems to be 2 balls of light in the distance, and when the FLIR locks on it speeds away so fast the FLIR can’t keep up with it.

These high-speed objects are man-made or are they of alien origin?