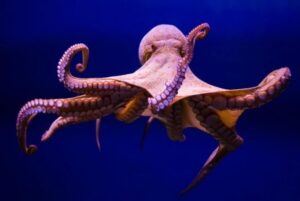 There are few questions more mystifying than the origin of life on Earth. Were the building blocks of cellular life forged in an early primordial soup and lit on fire by lightning? Or was life carried here by an asteroid, as posited by the panspermia theory?

In the last few decades, a particular species has caught the eye of scientists researching the panspermia theory. Now there is a new paper, “Cause of Cambrian Explosion – Terrestrial or Cosmic?”, published in the Progress in Biophysics and Molecular Biology.

The new research suggests that the explosion of life on Earth during the Cambrian period 540 million years ago may have been buttressed by molecules of alien life that hitchhiked here on cosmic debris.

One species that may have resulted from this is a non-Earth based version of the octopus.

“…a very plausible conclusion – life may have been seeded here on Earth by life-bearing comets as soon as conditions on Earth allowed it to flourish (about or just before 4.1 Billion years ago); and living organisms such as space-resistant and space-hardy bacteria, viruses, more complex eukaryotic cells, fertilised ova and seeds have been continuously delivered ever since to Earth so being one important driver of further terrestrial evolution which has resulted in considerable genetic diversity and which has led to the emergence of mankind.”

Citing anomalies in the species’ central nervous system, their “camera-like eyes,” and their genetic adaptations that did not seem to flow from their evolutionary ancestors, the authors state that fertilized octopus eggs from another star system or galaxy may have traveled to the Earth on an icy comet and crashed into the ocean.

Alternatively, an alien virus may have attacked early families of squid and caused their sudden evolution.

In addition to how they potentially evolved (or not), the modern octopus’ traits set it apart from any other animal. Octopuses have one centralized brain and the rest is distributed through each arm. In terms of brain-to-body ratio (a factor helpful in determining intelligence) the octopus has the largest ratio of any invertebrate.

This intelligence goes far beyond simply moving through mazes or opening jars. Octopuses are some of the only invertebrates to use tools. They can wield external weapons, such as the way the blanket octopus carries tentacles from the Portuguese man o’ war. And they hunt collaboratively with other species, sometimes having to give their fish partners a good punch to keep them in line.

In addition to their intelligence, personalities, and complex biology, some octopuses seem to exhibit other-worldly powers. Between 2008 and 2010, Paul the octopus was regularly asked to pick the winners of FIFA games. Out of 14 predictions, Paul was correct 12 times, an 85.7% accuracy rate.

The theory is not without its mainstream critics, of course, but it’s fascinating to imagine the genesis of life on Earth originating elsewhere. Even that, though, would still not explain the origin of life itself.