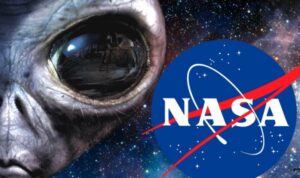 Clark C. McClelland is a man with a strange story. He claims to have witnessed a meeting between NASA astronauts and a 9 foot tall extraterrestrial.

McClelland says he worked for NASA as a spacecraft operator at the Kennedy Space Center in Florida. During his career, he was involved in 650+ missions within the Mercury and Apollo agenda as well as the Space Shuttle program.

It was during one of the Space Shuttle missions that he became a spectator to a close encounter between NASA astronauts and a tall alien.

According to his account, McClelland was monitoring the mission from his desk at the Kennedy Launch Control Center when he saw something he wasn’t supposed to see:

“The ET was standing upright in the Space Shuttle Payload Bay having a discussion with two tethered US NASA astronauts! I also observed on my monitors, the spacecraft of the ET as it was in a stabilized, safe orbit to the rear of the Space Shuttle main engine pods.

“I observed this incident for about one minute and seven seconds. Plenty of time to memorize all that I was observing. It was an ET and alien star ship,” he wrote on his website.

McClelland says he couldn’t have been mistaken as his experience pretty much guarantees his expertise in “visual recognition of crafts created and flown by the human race, whether secret or otherwise.”

He says he wasn’t the only official who witnessed the meeting. Sometime after the incident, a friend confided to him that he had seen the same alien inside the shuttle’s crew compartment.

McLelland says, “Aliens are here on Earth, they walk among us. They may have been implanted into our various Earth governments”.

NASA made no statements denying his employment and he has photos and documents that actually support his claims regarding a lengthy career at the Space Agency.

He goes on to say that NASA is not a civilian agency:

“The Pentagon owns NASA. Some of the DoD (Department of Defense) missions I participated in were top secret. Those missions carried TS Satellites and other space mission hardware into orbit where several crews met with ETs.”

According to his claims, the DoD-governed NASA has been hiding key information regarding alien contacts while the U.S. has long maintained a covert military alliance with at least one alien race.

On a side note, McClelland says he cultivated a close friendship with NASA astronaut Edgar Mitchell, one of the first space pioneers and the sixth man to set foot on the Moon.

Mitchell was a proponent for the existence of aliens and their presence on Earth. In 1998, at a conference in Connecticut, he said that he was “90 per cent sure that many of the thousands of UFOs recorded since the 1940s belong to visitors from other planets.”

Mitchell is just one of many astronauts who are outspoken about their views on the ET phenomenon.

Recently, there have been several claims that NASA’s live feed cameras showed UFOs docking with the International Space Station.

And then there are the many instances when the feed was cut just as unexplained objects showed up. Could the ISS serve as a rendezvous with extraterrestrials, unbeknownst to the seven billion people below?

While his credibility has been often brought into question, many believe McClelland is speaking the truth. Sure, calling him a crackpot seems a valid solution, but what if he’s not? Let us know what you think!