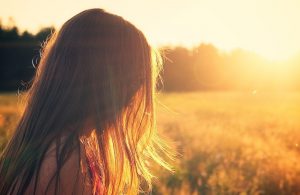 Curly or straight, long or short, thick or fine. Love it or hate it, your hair is an important personal characteristic. We spend a great deal of time and money caring for our lovely locks, but hair is so much more than just a fashion statement. Hair has its own unique spiritual power and energy.

Hair, religion and culture often go together. Consider the men of the Orthodox Jewish faith (Hasidic Judaism) who wear their hair with the traditional side curls or Payots. This is done in adherence to the writings of the Torah, but wearing payots also reminds followers that there are two parts of the brain—the front part for spiritual thought and the back brain for bodily functions.

The peyots serve as a separation for these areas. The Sikh religion is another faith focused on the importance of hair. They believe that hair is a gift from God and should not be cut. Among the Islamic faithful, men have specific hairstyle guidelines to follow while women are required to keep their hair covered.

Then there are the cultural aspects of hair. How we wear our hair is considered an expression of our individuality. From the 1920’s flappers who cut their hair short to proclaim women’s equality, to the hippie generation of the 60’s who grew their hair for peace, the strands on our heads are often used to make political statements. It’s amazing that something as simple as a hairstyle can speak for generational and cultural movements.

Since the biblical story of Sampson and Delilah, hair has been equated with magical powers. Simply by ordering the locks to be cut from his head, Delilah rendered Sampson helpless and devoid of his superior strength. Was this just symbolic or were there actually spiritual and energetic properties at work?

According to U.S. Governmental studies conducted during the Vietnam War, a connection between hair and intuition was discovered. Groups of Native Americans were recruited for the war effort due to their demonstrated and unmatched tracking skills. However, once given the standard G.I. enlisted haircut, their previously tested skills were found sorely lacking.

Among the theories and explanations gained from this experience was that hair acts as a sort of antenna system. Each individual strand can act as an antenna while collectively hair serves as antenna array. It makes sense. How often has your intuition reached out to you by making the hairs on the back of your neck stand? This gives a whole new meaning to the phrase “hair raising experience.”

Hair is also related to the energy of the aura. When viewed through Kirlian photography, there is a definitive energy field seen around the hair. Yet when hair is cut, the energy field appears to weaken.

Could it be that hair not only acts as a sensor, but a transmitter? Hair obviously carries the energy of the wearer. In Victorian times and even earlier, women often gave their true love a lock of their hair. Could that have been more than just a memento?

Hair is often called a person’s crowning glory. While that term often refers to qualities like color and shine, spiritually it means so much more. The hair covers the crown chakra—our connection to Spirit or the Higher Self.

It can serve as a reminder of our connection with the Divine. Think of it as a beautiful bridge between you and Source. Consider your hair as your conduit to the Universe.

So the next time you complain about those unruly locks, think of the spiritual power of your hair. Treat it lovingly and provide it with the utmost care. Let its beauty be a reflection of your true spiritual radiance.