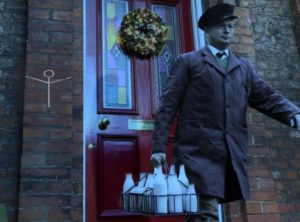 In the murky world of superstition there are many alleged omens of death. Just setting eyes on a passing ambulance for example, will sometimes spur some people to say, “Touch my eyes and touch my toes and never go in one of those.”

There was a case documented in the newspapers back in the 1960s, of a man walking to Birkenhead Park one sunny afternoon when a funeral hearse pulled up alongside him and the driver asked the man for directions to a certain house.

The man the hearse driver talked to went home and gassed himself as he believed the coffin transporter had been a sure sign of his forthcoming death.

Another widely reported omen of approaching death is the sudden and inexplicable fall of a painting from a wall.

I have received many reports of this type of omen being observed and of death following soon afterwards.

A Mrs Jones once told me how she had visited her Auntie Ellen at her home on Gainsborough Road, Wallasey one day in May 1965 and how they had been sitting in the parlour talking when a large painting over the fireplace suddenly fell down.

The string across the back of the picture was intact and the hooks on the wall were still in place, and the girl’s aunt said the baffling fall of the painting was a sign that someone in the family would die.

The most sinister omen of death I’ve investigated over the years has to be the Three Knocks of Death. I have a folder in my study that is bulging with reports of this portent.

If you hear the Three Knocks, you will not be the one who dies – it’s usually someone close who has not heard them who will supposedly meet an untimely end, and there are quite a few local cases of this eerie phenomenon across Wirral.

A case in point is the death of a young man on Noctorum Avenue, Prenton in 1958.

The man was only 33 years of age and his wife Moira was sitting next to him in bed, reading a book one November night in 1958 when she heard three raps on the window pane.

Moira’s husband did not hear the knocking because he was fast asleep. Moira told her mother about the strange knocks and her mum said that it was the ‘Three Knocks of Death’ and that it meant someone close to the family would die. Later that day, Moira was visited by two policemen who told her that her husband had been found dead in his car near his workplace in Heswall.

He had died of natural causes.

On two more occasions, Moira heard the Three Knocks, and twice she later learned of the death of someone close.

Should you hear the ‘Three Knocks of Death’, you must ‘answer’ the knock immediately by rapping once on wood to cancel the malevolent rapping spirit’s spell.

Just as mysterious and spine-chilling as the ‘Three Knocks of Death’ is the baffling ‘Mark of Death’ – a weird symbol that was chalked on the walls and front doors of houses where a death would soon afterwards take place.

The symbol of death resembles a matchstick man with no legs, with straight arms reaching upwards at angles resembling the hands of a clock at ten minutes to two.

Some claim the symbol is of Romany origin, whilst others think it is an old Native American glyph meaning death.

The symbol was seen by a milkman on a wall to the left of the front door of a house on Birkenhead’s Fairview Road one morning in 1959.

The milkman never gave much thought to the odd chalked graffito as he delivered milk to the residence, but he was later told that the 35-year-old bachelor who lived at the house had been found sitting up dead in his armchair with a look of horror on his face.

The milkman also heard that although the man had allegedly died from a heart attack, many believed he’d been the victim of a curse that had killed him, because a strange symbol had been found chalked on the front of his house, and this weird matchstick man symbol had been found on the walls of other houses were people had met sudden deaths out of the blue.

The milkman started noticing more of the symbols on walls and doors of houses over the forthcoming months, and on every dwelling they were chalked on, someone in that household would die shortly afterwards.

The milkman called me years later on the Billy Butler Show on Radio Merseyside to tell me of the strange accursed symbols, and not long afterwards a postman called in at the station to say how he had seen the same weird match-stalk figures chalked on doors in Heswall, and wherever they appeared, people would die.

On one occasion in late November 1950, the postman saw one of the symbols scrawled on the front door of a house on Tower Road South, Heswall, and days later the man who lived at the house was tragically killed in a lift accident at Hamilton Square Station.

No one was ever seen chalking the ‘Marked for Death’ symbols, and the weird thing is that they are still occasionally reported to me.