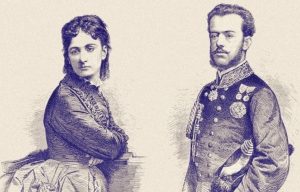 Whilst the tragic 1867 wedding story of the King of Italy’s son has never been either verified or disputed, it soon fell into the category of an urban legend.

The wedding of the princess and duke was according to legend, marred by tragedy on a such an unprecedented scale, that the royal family suppressed the truth of it.

The story begins in May of 1867 as Princess Maria del Pozzo della Cisterna prepares for her wedding to the King’s son, the Duke of D’Aosta. The first disaster struck before the wedding when the Princess’s wardrobe mistress hanged herself. The superstitious princess immediately hired another seamstress to make her a new gown.

On the day of the wedding, the ceremony was delayed twice, once when the officer leading the royal procession suffered sun stroke and collapsed. Then, when the party arrived at the palace, the gatekeeper failed to open the palace gates for the matrimonial procession. The gatekeeper was found dead nearby, lying in a pool of blood.

Whilst the actual wedding itself escaped mishap, immediately after the ceremony, the best man accidentally managed to shoot himself in the head while toying with a ceremonial gun.

Eventually, the bride and groom were escorted by a procession of carriages to the railway station where the royal newly-weds were to board a train for their honeymoon. However, fate was again to intervene.

The officer who had drawn up the marriage contract suffered a heart attack and died, and the anxious stationmaster managed to fall under the wheels of the approaching bridal train.

King Victor Emmanuel, by now convinced that the ceremony was cursed, rushed to the station to prevent anyone from boarding the train, and attempted to get everyone back to relative safety of the palace, but on the way, the Count of Castiglione, who’s riding beside the royal carriage, fell from his horse and is run over by the carriage.

He’s killed when the weight of the wheels drove one of his uniform medals through his uniform into his chest.