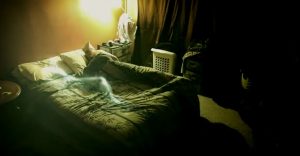 The diagnosis is familiar. You feel drained of energy, have a diminished ability to concentrate, and crave time alone. You find yourself sleeping more than normal and feel like you’re losing a part of yourself day by day. In a normal world, doctors might suggest you have a case of depression. In a paranormal world, you might have a ghost attachment.

Sarah had never experienced the winter blues before. Her mental health was sound and her spirit was high. After having a bad day, she treated herself to dinner at a new restaurant, which left her feeling fatigued. Several days later, she felt no better.

In fact, she began losing gaps of time, finding herself short-tempered with bone-deep exhaustion. After suffering for nearly a week, she began to suspect that her issue wasn’t normal. Friends told her she had a case of the winter blues and suggested she stock up on vitamin D, but she knew this wasn’t the case. She’d never experienced winter blues before. Why would it start now? It wasn’t until she ran into a friend with mediumistic abilities that she learned the truth. She had a negative ghost attachment.

The symptoms of a ghost attachment often mimic seasonal depression, also known as Seasonal Affective Disorder. Unless you are a gifted medium, you might not feel the invisible fingers clinging to your soul. While depression is a very real medical illness, caused by chemical changes in the brain, and should be treated by a doctor, a sudden unexpected case of fatigue requires further pursuit. In Sarah’s case, the attachment was drinking her dry.

Lost souls, who’ve chosen to remain in our realm, need energy to survive. Some might take this energy from electronic devices and from natural electromagnetic sources, but other entities prey on the living. They find us in our moments of resolve, when our defenses are at their lowest, and they cling on like ghostly hitchhikers. Negative entities use this energy to pursue other ventures, such as wracking havoc on the living. Demonic attachments use it to gain control of the host.

Thankfully, Sarah was able to shed the attachment with the help of a talented psychic medium, who moved the entity back into the realm where it belonged. Others aren’t so lucky, enduring the fatigue for years before finding relief.

Depression is a real issue and should be explored by a doctor, but if the symptoms don’t cease with treatment, it can’t hurt to dig a little deeper for the solution. It might not be a normal illness. It might be paranormal.