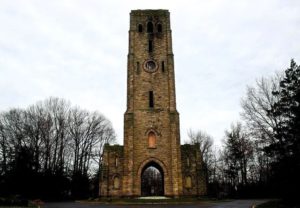 In the exclusive, sleepy little town of Alpine, New Jersey there is a devilish local landmark known as the Devil’s Tower . The estate known as “Rio Vista” was constructed in the 1900s, and, the tower (built later as a centerpiece) was erected sometime around World War I.

The owner of Rio Vista (Manuel Rionda) built the tower for his wife, so that she could view New York City across the Hudson River.

Local legend (or urban myth) tells us that Manuel’s wife decided to climb to the top of the tower one evening. The legend continues on to tell us that from the top of the tower, Mrs. Rionda observed her husband with another woman; and, she was so devastated and afraid the town’s people would talk about her being scorned, she jumped to her death.

After the death of Manuel’s wife, it is reported that strange events started to occur in the tower. Manuel was afraid that his wife had come back from the dead to get her revenge, so Rionda ordered the work on the tower to stop, and, ordered the closure of an underground tunnel on the property.

However, rumors tell us that eerie occurrences continued to take place inside the tower, and soon, locals began talking about what was going on at the property and it quickly became known as the “Devil’s Tower.”

After Manuel Rionda’s death in 1943, the local residents tried to have the tower demolished, but, after several workers fell to their death, the town stopped the demolition attempt.

From there the rumors grew fast and more and more outrageous – with stories ranging from satanic rituals held inside the tower to animal slayings to a ghost that’s said to have risen from the dead. (The ghost is rumored to be Rionda’s wife.)

Another account states that the Tower was used as a temple for devil worship early in the 1900’s. Supposedly after many unspecified horrific events plagued the town, the locals murdered and burned the satanists in their Gothic stone digs. But they were a tad late – the Beelzebub posse had already managed to conjure up a few spooks to haunt the Tower.

It became a popular destination for partying teens in the ’70s and kids who had been inside reported encountering gusts of icy wind on calm nights, and claimed that you can see shadows in the windows of the tower.

Here is what one visitor to this place writes:

“I went to the tower on a few occasions after hearing from a close friend who grew up in a nearby town about the “legends” & supposed haunting. The first time I went I’ll never forget. As we approached the tower the fog thickened to the point you could barely see 20 feet ahead.

“It is blocked off by a sign but you could still approach. Without going into great detail all I can say is you get an ominous feeling, especially at night. I saw shadows and light spots appear here and there around the tower almost flickering on and off. My heart rate elevated and I got sick to the stomach. I quickly pulled away.

“What’s even more striking to me is what occurred after. Immediately after visiting, I started having an unusual streak of bad luck. Everything from misplaced things on a daily basis to an unbelievable losing streak in Atlantic City.

“My friend for some weird reason suggested I visit the tower again to “put it behind me”. I did, and after a second unpleasant experience I went home and the streak of bad luck was over. I can’t explain what occurred. I heard SEVERAL stories from my friend and his friends about Devils Tower experiences they had that made mine pale in comparison.”

The tower itself is still claimed to a variety of paranormal activities. Noises can be heard from inside of the chamber, and strange perfume smells come and go. If you listen closely you can still hear the wife screaming in agony as she finds out her husband is cheating. You can also hear the sound of construction workers falling to their death.

It’s said that after her death eerie things became everyday occurrences at the Tower. Manny stopped work on the Tower – after all, there wasn’t any more Harriet to impress – and closed the underground tunnel that led to it, fearing that his wife had returned from the dead for revenge. But the locals claim the spookiness continues.

Passers-by have reported that it feels like someone has taken control of their car while near the Tower, resulting in many accidents around the vicinity of the tower and even death.