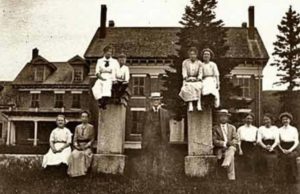 The Hayden House still stands on the outskirts of town, although the Hayden Family that once lived there is thought to have perished under the vengeful curse of a wronged mother-in-law.
William Henry Hayden moved his family to Albany, Vermont in the early 1800s, and he borrowed money from his mother-in-law Mercie Dale who was a widow and financially well off, in order to purchase the house.

Mercie moved in with the family and her money helped the family settle into this new community. William squandered the families money away supporting his lavish, party lifestyle, and he never paid this loan back and several years later he found himself in serious financial trouble. He then asked for a second loan that he did not/or could not pay back. This angered Mercie.

This financial stress pushed her to move out and caused her to become terribly ill. She believed her illness was caused by William who she thought had poisoned her. In 1808 on her death bed Mercie cursed the Hayden family, saying that the third generation would be the last of the Hayden line and the family would end in economic ruin.
“The Hayden name shall die in the third generation and the last to bear the name shall die in poverty.”

Mercie bitterly announced she refused to be buried in the Hayden family cemetery she instead requested to be interred in a neighbors’ family plot. Life went on and the curse was forgotten.
But, Mercie’s grim curse with her dying breath came true. By 1927, according to various accounts, the entire Hayden family had died due to an assortment of inexplicable illnesses.

William Hayden’s daughters all got married and supplied the couple with several grandchildren. But the family’s luck and fortunes quickly took a turn for the worse. Of the couple’s four sons all but one died young. The one that survived Henry was named after his father. He slowly started to show signs of erratic behavior.

William and his wife Azabah became estranged after he squandered most of the family fortune. He later also lost his eyesight. At one point fled to Canada to avoid his creditors. He died later in New York penniless.

WillIiam’s son Henry Jr. built an extravagantly furnished home for his family in 1854 after his father’s death. The Henry Hayden Jr. family quickly became the envy of the neighborhood. The family would take regular pleasure rides down South Albany Road in handsome horse-drawn carriages. Henry’s family lived comfortably with many servants to fulfill all their needs. Their annual New Year’s party held in the new mansions 3rd story ballroom with its “spring suspended floor” was always a big success.

As Henry Jr. continued to grow unstable his mother cut him out of the will. He had one daughter named Mamie.

Henry died in 1910 of a cerebral hemorrhage, and his body was carried in a horse-drawn hearse that passed his old home on the way to the cemetery. The curtains in the windows were shut in tribute but by this time his mansion had been empty for 20 years because he could no longer afford to live in it.

Many now recalled Mercie’s curse and most believed it had taken its toll on the Hayden family.

The only Hayden left alive was Henry Jr.’s daughter Armenia or as she was known Mamie. All that was left of her inheritance was an unsavory family reputation and a large number of unpaid bills, ill and humiliated she moved to Waterville, Maine where she died alone in poverty in February of 1927.

She was the last victim of Merice Dale’s curse.

A family from Canada purchased the old Hayden mansion for $25,000, and rumors started to spread that the underground tunnels that Henry Jr. had once used to smuggle illegal Chinese immigrants to supply his farmland with cheap labor were now being used for a large bootlegging operation. This new family held dances once more in the 3rd floor ballroom. They enjoyed the social status this brought. In 1922 they sold the mansion.

Most of the subsequent owners did not have the money to maintain the old mansion. The estate was eventually sold piece by piece other parts burnt down. The mansion abandoned for years spiraled into major disrepair.

Stories began to circulate that the old mansion located on the outskirts of town was haunted. People passing by reported seeing strange lights. Others mentioned hearing music coming from the 3rd floor ballroom. They stated this room was brightly lit at the time they heard this music.

Some believe that the ghosts of the Chinese immigrants that Henry smuggled into the country remain. These workers were often buried in unmarked graves near the family’s farm.
If the curse proved to be the families undoing, the moral of the story should be “If you borrow money from your mother-in-law, pay her back.”