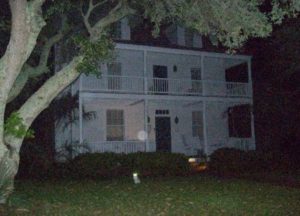 If you spend time visiting the little town of Beaufort, no doubt you’ll be confronted with the locals’ stories about ghosts and pirates, especially Blackbeard.

The notorious captain (as well as other pirates) has certainly left his mark on this quiet seaside village, murdering many villagers, lovers, and crewmates who later came back to haunt the living. One particularly interesting, lust-filled story takes place around Hammock House, a large mansion at the top of a hill…

Captain Madison Brothers was a young, hard-working sailor admired for his skill and ambition. However, he was infamously prone to fits of rage, especially when he had been drinking.

It was rumored that his temper had drove him to fight and even kill. This earned him the nickname of “Mad” Brothers, courtesy of the other ship captains.

Somehow, Brothers had managed to win the heart of the beautiful and wealthy Samantha Ashby. Before he left on another sea voyage, they agreed to be married in the Hammock House upon his return.

Time passed, and Samantha arrived again in Beaufort with plenty of time to spare. But her fiancé had not been so lucky, and was delayed out at sea with problem after problem. His first mate had fallen severely ill, the ship’s masts were damaged beyond repair, and storms were constantly tossing the ship and crew about.

Meanwhile, Samantha had been waiting anxiously back in Beaufort, when she heard news of her brother returning from the British navy. She met up with Lieutenant Carruthers, and the two siblings spent a few days walking along the beach and catching up on each other’s lives.

Finally, during a large party in the Hammock House, Captain Brothers’ ship finally arrived. Enraged by the light and merriment pouring from the house, the captain stormed inside.

Timing could not have been worse, for the first thing he saw was Carruthers giving Samantha a brotherly peck on the cheek. Thinking a stranger had moved in on his bride in his absence, Brothers drew his sword and exclaimed, “Betrayed!” loud enough to silence the entire party.

Carruthers drew his sword as well, and although a few guests tried to explain the misunderstanding, the two seamen began to duel. The fight whirled madly throughout the house, until Carruthers was finally killed on the staircase. Two hundred years later, his blood is still visible, and many pay a visit to his grave by the sea.

Another victim of pirate rage was one of Blackbeard’s young “lovers”. (He is said to have at least two dozen wives in ports all along the coast.) This one, however, was rather disinterested and desperately fought against all of Blackbeard’s romantic advances.

Fed up with her noise and struggle, he hung the girl from a large oak tree while on their “romantic” stay in the Hammock House.

In 1862, the house became infamous when three Union officers were sent to scout the location and disappeared without a trace. These men were found in 1915, some fifties years later, when workmen discovered their remains near the back porch area.

The Union army used the Hammock House as an outpost for some time and many of the soldiers reported feeling uneasy there. After the war, the house was abandoned and left to dilapidate. During its use and its abandonment, the house’s reputation grew. People whispered about strange happenings and rumor spread that the place was haunted.

Many people who have visited the house in the past have claimed to hear the screams of a woman in the backyard but when investigated, no one was there.

Inside the house many have reported hearing thumping sounds on the attic steps, a man screaming on the second floor and the sounds of heavy boots stomping on the first floor. Many have also claimed that there is a permanent blood stain on the second floor that cannot be scrubbed away or even painted over; it just continues to resurface.

Today, the Hammock House is privately owned and the current owners don’t seem to be put off by their ghostly live-ins. The house itself has been restored to its former beauty and can be seen via the Historic Homes Tour of Beaufort or the Ghost Walk Tours.