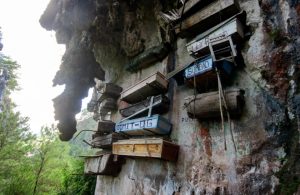 The Igorots are an indigenous tribe living in Sagada, in the northern Philippines and have long practiced the tradition of burying their dead in hanging coffins, nailed to the sides of cliff faces high above the ground.

It is claimed that this practice is over 2000 years old, although nobody seems to know whether there are any coffins that are actually that old.

As the elders of the town reach old age, they begin to carve their own coffin. However, if the person is too weak or ill, other family members or relatives will do it for them instead.

The coffins are made of hollowed log of pine or lumber, and usually they are smaller than the actual size of the deceased person, as they are placed into the coffin in the fetal position in order to fit, as the townspeople believe that the dead should leave the world in the same way that they entered it, and by doing so, the deceased will have a complete peace.
The body of the deceased is also smoked to avoid fast decomposition.

Pre-burial rites begin at the dying stage, animal sacrifices will be performed together with chants and prayers for the dying person. When death finally falls, family members are required to eat and stay with the departed and are not allowed to leave the village. 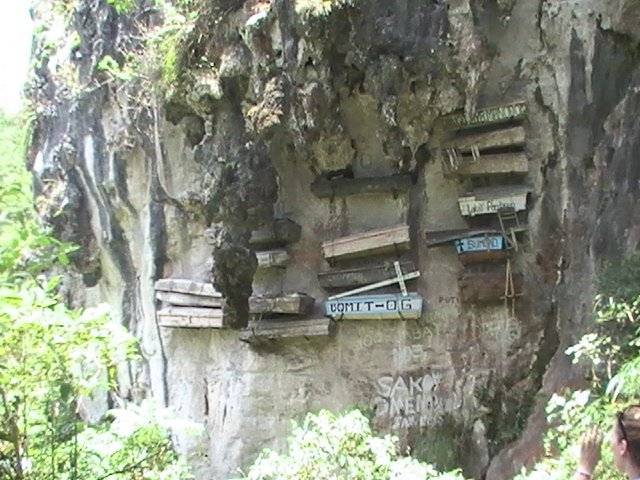 They are also asked to offer any help they can give, this will prevent misfortunes to happen among the remaining family members.

The coffins are hung in high-elevated cliffs, and when on the way to the cliffs, it is encouraged that many different people carry the corpse. It is believed that the body fluid of the dead if smeared to the person carrying the coffin gives good fortune, luck, success or skills from the dead will be inherited whoever carries the coffin.

Hanging the coffins in high-elevated is a century-old belief, some believe that the higher the body is laid, the closer the person is to heaven. Today, people from Sagada still observe the traditions and rituals of their ancestors.

Some of the coffins are suspended by ropes and strong wire, others are nailed to the cliffs, they do this by climbing down the cliff face …..and then having the coffin lowered for them to nail it to the cliff, the body is then added afterwards in the same way. 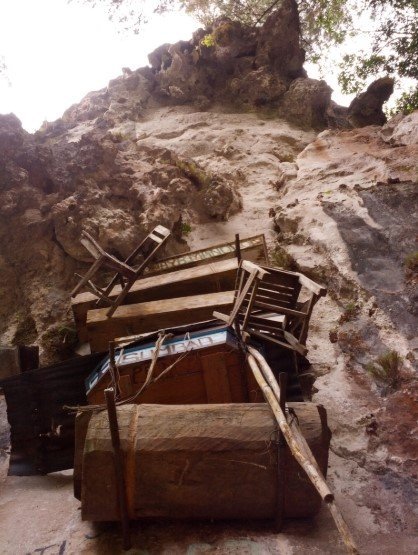 It is believed that there were also more practical reasons for this form of burial. For instance, it has been suggested that the Igorots knew that corpses would decompose quickly when buried in the ground. Hence they decided to bury them on the side of cliffs.

In addition, it is said that animals would eat the corpses if they were buried in the ground. Moreover, during the days when headhunting was a common practice, corpses buried in the ground would have been easy targets, while corpses suspended from cliffs would be safe from the head hunters.

The Unusual Grave With A Window Of Dr. Timothy Clark Smith