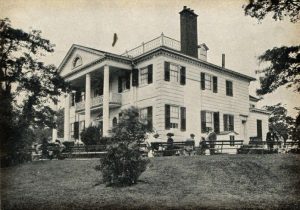 British Colonel Roger Morris built the house in 1765. His wife, Mary Philipse, had been romantically involved with George Washington before their marriage.

Morris had returned to England and his wife and children went to her parent’s home in Westchester County when Washington used the mansion as his headquarters in 1776 during the Battle of Brooklyn.

The site was later used by the British, then confiscated and sold as a tavern that became the Calumet Inn after the war was over. Stephen Jumel bought the mansion for his wife, Eliza. The top floors of this, now, four story, museum are closed to the public and employees won’t venture there.

She was alleged to have covertly carried political intelligence from Federalist Hamilton to Republican Burr. It was rumored that she caused of the duel between Hamilton and Burr because they competed for her favors. She became the mistress, then wife of wealthy French wine merchant Stephen Jumel.

Jumel died, after he fell from a carriage. Eliza pushed him out of the carriage and is alleged to have watched him die. She, a year after he died, married Aaron Burr, then filed divorce proceedings against him, stating he had squandered her money on Texas land settlement deals and committed adultery.

The divorce decree stipulated that she could remarry any time, but Burr couldn’t marry before her death. Ironically, her lawyer was Alexander Hamilton, Jr., son of the man Burr killed in the duel. Eliza lived the Morris-Jumel mansion until her death in 1865.

Encounter with the Ghost of Eliza Jumel

On January 19, 1964, a visiting class of school children arrived at the museum before the museum’s curator did. The students became boisterous while waiting outside.

A woman dressed in a purple gown came onto the second floor balcony to reprimand them and tell them to be quiet. She turned and walked through a closed wooden door.

When the curator arrived, the children complained about the woman who wouldn’t let them in the building. There was no woman in the house.

Eliza’s first husband’s specter has been sighted and allegedly communicated with Hans Holzer and “medium” Ethel Myers during two séances.

According to them, although contemporary accounts of his death stated it was caused by him falling from a carriage, his ghost allegedly said Eliza murdered him.

He had been injured in an accident with a pitchfork. She ripped off his bandages and watched him while he bled to death.

People have sighted Aaron Burr’s ghost. A teacher who accompanied her class on a visit to the mansion ran upstairs to the top floor, which is off limits to the public.

She saw a specter of a Revolutionary soldier step out of a painting. A maid is said to have jumped out of a window because of unhappy love affair with a Jumel family member.

Eliza is an apparition, an intelligent ghost. She was seen and communicated with the boisterous students. According to survival theory, the personality of humans and animals survives the death of the physical body. Holzer’s account of Stephen Jumel is, at best, dubious.

Ethel Meyers’ claim to fame is that she was involved in The Amityville Horror investigation. She averred the debunked hoax was true. In their investigation of Ringwood Manor, Meyers claimed there were three ghosts: servants Jeremiah and mistreated Jackson White and Elizabeth Erskine.

According to a Ringwood Mansion curator, Elizabeth Erskine never saw the present house which isn’t near the site of the original one she lived in and she doesn’t haunt the mansion.

She never abused servants. This is only one example of Holzer’s and Meyers’ lack of credibility, therefore, there is compelling reason to doubt his report.