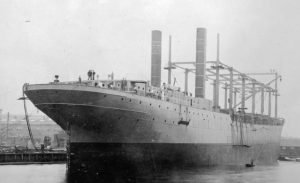 The Cyclops and 306 crew and passengers disappearance without a trace within the area known as the Bermuda Triangle is the single largest loss of life on a ship not involved in combat. There were theories, but no answers. Her wreckage has never been found.

The Cyclops was a Proteus class collier ship built for the US Navy before World War I. Before the war, she supported U.S. warships in European and Caribbean waters off the Atlantic seaboard as a member of the Naval Auxiliary Force.

The Cyclops was commissioned into service in 1917 and continued carrying supplies to facilitate the U.S. Navy’s wartime operations. She is remembered best for her disappearance.

She left Rio de Janeiro on February 16, 1918 and arrived in Bahia on February 20th. Before leaving port, Captain Worley had submitted a report that the starboard engine had a cracked cylinder and wasn’t operative.

It was recommended that repairs be delayed until the ship returned to the United States. Two days later, she departed for Baltimore, with no scheduled stops; however she made an unscheduled landing in Barbados on March 3rd.

The Cyclops left for Baltimore on March 4th. The molasses tanker Amalco sighted her on March 9th near Virginia. She was never seen or heard from again.

Reports indicate that on March 10th, a violent storm swept through the Virginia Cape region, suggesting that the combination of the overloaded condition, engine trouble and bad weather might have caused the loss.

The Cyclops and Espionage Theory

About the time the search for the Cyclops was called off, a distressing telegram was received by the State Department from Livingston. It stated that Captain Worley was referred to as the damned Dutchman and apparently was disliked by other officers.

There were rumors about men being confined and one executed. Livingston wrote that there were numerous Germanic names.

The Office of Naval Intelligence investigations revealed that Captain Worley was born Johan Frederick Wichmann in Germany in 1862 and he had arrived in America by jumping ship in San Francisco in 1878. By 1898 he had changed his name to Worley. During this time he qualified for the position of ship’s master and had commanded several civilian merchant ships.

The investigators discovered Worley berated and swore at officers and men for minor offenses, sometimes becoming violent. There were allegations that he was pro-German and might have conspired with the enemy.

His closest friends and associates were either German or Americans of German descent. One of the passengers on the final voyage was Alfred Louis Moreau Gottschalk, the consul-general in Rio de Janeiro, who was pro-German.

This led to the theory that Worley handed the ship over to the Germans. After the war ended, German records were searched and this theory was debunked. 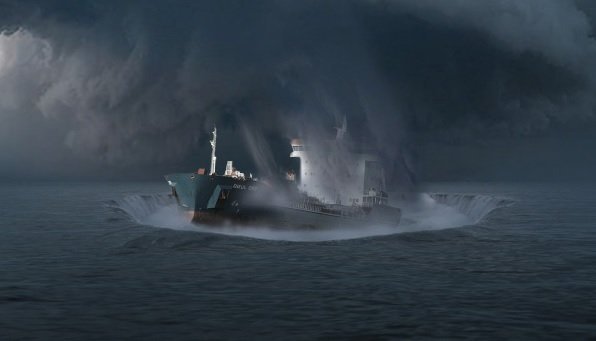 Cyclops and the Bermuda Triangle

The disappearance of the Cyclops is often credited to the Bermuda Triangle, which is an imaginary line from Miami Florida to Bermuda to San Juan, Puerto Rico.

It’s considered one of the earliest documented incidents involving the disappearance of a US ship. Many people cite the fact that the vessel disappeared without sending a distress signal as evidence it was lost in the Bermuda Triangle.

Ship-board communication was in its infancy in 1918 and it wasn’t unusual for a fast-sinking vessel to have little or no time to make a distress call.

It’s alleged that, in 1968, a Navy diver reported finding the wreckage of an old ship off of the Norfolk, Virginia coast in about three hundred feet of water. He said it looked like the bridge was on stilts.

When he saw a picture of the Cyclops, he was convinced this was the ship whose wreckage he saw. The location would have been in the area where the violent storm of 1918 occurred. Further expeditions to the site failed to find the wreckage.

The disappearance of the Cyclops remains an enigma of the ocean.