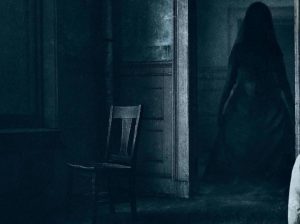 I bought and moved into my home here in north Georgia in July 1983. When I first moved here everything seemed to be extremely ordinary. In November of that year I went through a very messy divorce.

I lost almost everything except for the house. I eventually had no choice but to give up the job that I had been working at for many years and started work as a long distance truck driver so that I could pay my bills and child support.

My first notice that anything was amiss happened when I returned home from one of my runs. I pulled into the nearby town where I was based at and dropped my refrigerated trailer.

As always, I had my C.B. radio on and as I started to leave to come home I heard a girl talking on it. (I was always on the road and when I did manage to make it home I just drove the rig to my house where I could clean it and be ready to leave the next day or so).

Anyway, one thing led to another and before long I was on my way home with the girl in the truck with me. On the way home I stopped and got a few beers and then we came to the house.

A few months before I had the power turned off since I was not at home for months at a time and couldn’t see any need to pay anything extra. When we got here we came in the living room and sat, drinking a beer and talking by candlelight. At one point I went to the back of the house to go to the restroom next to the back bedroom.

The door to the bedroom had been standing open for at least the last 6 months and was still open. I went back to the living room with the girl.

Then she started talking some real weird talk, about how she has a ghost that follows her everywhere that she goes and moves things around, etc. I was thinking to myself, “Boy, who have you picked up here?” and was just generally thinking that she was really way out there somewhere.

A few minutes later I went to the restroom again, only this time the bedroom door was CLOSED. The girl had never left the living room and there were no windows or doors to the outside open for any breeze or anything.

The next morning I took her home and have never seen her since. After that time, when I would come home I would come into the house, usually at night, and proceed to go to bed. A lot of times I awoke thinking that someone was in the room with me but I could not move. It seemed as if I were paralyzed or something. I never saw anything during those times but it really freaked me out.

Many times I would go out to the driveway and climb into the sleeper in the truck, lock the doors and sleep out there at night. I am sure that my neighbors thought that I was crazy. In 1986 I met my now-wife and she moved in with me. I changed companies where I could be home on the weekends. I began to notice when I would be sitting in the living room watching TV.

I would see a figure from the left corner of my eye.

Thinking it was my wife I would turn to look but when I turned my head to the left I would see a white blur of a figure going from the laundry room hallway into my bedroom, from left to right. At first I passed it off as a trick of light or something. A few weeks later my wife ask me one day if I ever saw anything in the living room. I asked her why and didn’t tell about what I saw.

She gave the same exact description as I had already seen.

I then started to realize that it had not been a trick of light. Sometime later my nephew stayed for a few nights with us on the weekend. On Saturday morning as I was cooking breakfast he came into the kitchen and asks me the same question that my wife had, about whether I had seen anything in the living room before. I asked him why, careful not to mention anything about what we had seen.

He told me that as he watched cartoons, he saw someone from the corner of his eye at the same place where we had seen it, and thinking that it was one of us watching him, he turned to look and when he did he saw a BLACK blur of a figure go from the laundry room hallway towards my bedroom, from left to right. One Saturday morning I awoke around 5:00 a.m. and had the urgent need to go to the restroom.

As I sat on the bowl doing my business, I heard footsteps coming down the hallway towards the restroom.

I then heard a man’s voice talking. It was loud enough that I could hear it well, but I couldn’t understand what was being said. I don’t understand why, but for some reason I thought that my wife had gotten up from bed and had come down the hallway and continued about my business. A few minutes later I came back up the hall and into the kitchen expecting to see my wife making coffee.

She wasn’t. I went on to the bedroom and she was still there, sound asleep. Also, for about 3 months after she had moved in, every night after we had gone to bed there would be a tremendous bang on the top-most glass in the bedroom window over our bed.

The first few times that it happened I thought that a bird had flown into the window or something. But it sounded like someone had taken their flattened out hand and hit the window as hard as they could. We thought that it would break. We never found out what was causing this. Then it suddenly stopped. About a year after we were married I was injured at work and had back surgery. I was forced to retire and for many years I have been homebound. Sometimes during the day while I have been in the kitchen, where I tend to spend most of my time, I have been startled by a very loud crash in the laundry room area of the house. It sounds like something very heavy has fallen onto the floor and it shakes the entire house. We always buy laundry detergent from the local Sam’s Club in 40 lb. containers.

This sounds like this barrel of detergent has been lifted about 4 feet up and dropped onto the floor. Every time that it has happened I have always investigated but have never found anything out of place or anything that could account for the tremendous noise. Just recently I found a web site that described how to try to record EVP’s.

I got my micro-cassette recorder and an amplified external mic and followed their advice on how to do this. I started in the kitchen asking questions, waiting for approximately 15 seconds between. As I asked I walked down the hallway to the laundry room. While outside the laundry room I again asked the question “What is your name?”, and then some others pertaining to its purpose, etc.

When I played back the tape at normal speed all that I heard was myself asking the questions. Then I slowed the recorder to the other speed and listened again. This time when I asked the question “What is your name?” for the third time while outside the laundry room, I heard something say “NAME”.

Right after this was said I started to ask the next question.

I don’t know if there was anything else that would have been there or not, but if there was I covered it up with my voice.

The funny thing about this though was that when I played the tape again at the slow speed my voice was substantially slowed down and dragging.

But the voice that said “Name” was at normal speed but kind of like a whisper. Like I said it cannot be heard when the tape is played at normal speed.

A few weeks ago I was asking my oldest son, who is now 19, if when believed here he had ever noticed anything strange or had seen or heard anything. His immediate response was “HELL YES”. When he lived with us his room was the room next to the restroom where the door mysteriously closed by itself.

He said that he had heard footsteps coming down the hallway towards his room but always stopping at the restroom, voices talking, has seen the blurred figures, and also continues to see shadows moving on the walls when he comes to visit, like someone is walking by but no one is there.

I asked him where he had seen these shadows and he told me “in the kitchen, hallway by the laundry room, and in your bedroom.” We had never told him of any of these things until after he described them to me first. My wife doesn’t want me to try the EVP’s again because she is afraid that I might somehow stir up things again, as they have quieted down somewhat in the last few years.

One last note: about a year ago I was outside in the yard when my next door neighbor came over and asked me if we had ever had anything strange to happen in our home. Again I didn’t volunteer any information immediately, but asked him what he meant. He told me, somewhat sheepishly, that he had come home from work a couple of mornings before (he worked nights) around 5:00 a.m.

When he opened his front door and walked in (when you go in you are looking straight through his living room into the open kitchen) he saw an old woman, kind of hunched over, as if she were walking slowly. Funny thing was, she wasn’t going anywhere. When he turned on the lights she vanished. He turned them off again but she didn’t reappear.

They moved about 6 months later.

How To Remove A Ghost From Your Home