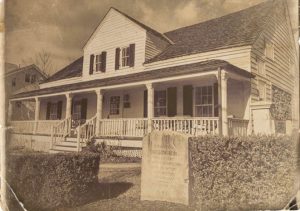 Bernardsville Public Library used to be the Vealtown Tavern, in Bernardsville, New Jersey. This library not only houses books, but it is home to a female ghost.

The Haunted Bernardsville public library is located on Morristown Rd. in Bernardsville, New Jersey. Before it became the property of the library, the building was the home of the Vealtown Tavern.

Around 1710 the tavern was built and Captain John Parker, with the help of his daughter Phyllis, owned and ran the tavern. During the Revolutionary war, the tavern became a common place for the army to stop in for a stay. Reports also state that General George Washington and his army troops often stopped in at the tavern while on the way to other locations.

According to the local legend of the library and the town’s people of Bernardsville, the innkeeper’s daughter Phyllis was in love with a local physician named Dr. Byram. The two of them fell in love and were married.

One night shortly after the wedding, General Anthony Wayne made a visit to the tavern with some of his men. That night while enjoying a few drinks, some important documents of the General’s were stolen while he was outside.

After some discussion with Captain Parker, it was determined that Dr. Byram was a spy known also as Aaron Wilde. Several days later, General Anthony Wayne captured him and after a speedy trial, they ordered that Dr. Byram should die by hanging.

Captain Parker, wanting to spare his daughter her dignity, offered to take Dr. Byram’s body back to the Vealtown Tavern to have him buried. He told his daughter that inside the crate was the dead body of a spy, but could not bare to tell her that it was also her dearly loved husband.

What Happened to Vealtown Tavern and Phyllis

What took place next no one is sure why or how, but Phyllis opened the crate and upon seeing her dead husband, let out a scream. According to legend she went insane that night, and nothing was ever mentioned about her after that dreadful night.

Years later in 1875, a family that was residing at the Vealtown Tavern reported the first known haunting. The family claimed to hear footsteps and various sounds. On several occasions, the woman of the house would hear screams, followed by sobs from a woman.

Some Sightings at the Bernardsville Public Library

Sightings at the Bernardsville public library have been numerous, and in 1974 after some renovations to the library, employees started to claim that they seen the apparition of Phyllis.

One employee even saw an apparition of a man dressed in 18th century clothing through a window. Then in 1987, a group of people held a séance, today library patrons in the local history room can view a video tape of the séance.

Another recent occurrence happened In November 1989. While in the reading room, a young child saw a ghost of a woman wearing a long white dress; he told his mother that he said hi to her, but that she did not answer him back.

Today many ghost hunters have searched and tested the Bernardsville public library for paranormal activites; all have claimed to encounter a disturbance, but some officials disagree on whether the disturbance comes from the ghost of Phyllis or some other spirit.