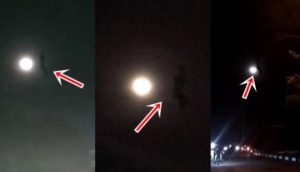 At the end of last week, residents of the Indonesian province of Aceh witnessed an unusual phenomenon.

In the evening, eyewitnesses noticed something amazing in the sky: a huge dark curved object appeared against the background of the moon. Puzzled Indonesians pushed up their mobile phones and began to film the mysterious anomaly. The footages they received swiftly spread across the World Wide Web, riveting the attention of tens of thousands of users.

Ufologists and other independent researchers of paranormal phenomena carefully studied these videos and came to the conclusion that they are genuine.

Nevertheless, the nature of the object remains a complete mystery for everyone: witnesses, Internet users, UFO researchers, and so on. Some expectedly hypothesize an aircraft of representatives of an extraterrestrial civilization.

Others are even inclined to believe that some kind of fantastic living creature hung over Aceh. According to skeptics, this secret aircraft belongs to the military.

It is noteworthy that in Indonesia since ancient times there are legends about flying chariots, similar to the vimana from ancient Indian literature.

It is therefore not surprising that some Indonesian witnesses were confused because they were amazed and frightened when they remembered the stories of their grandparents.