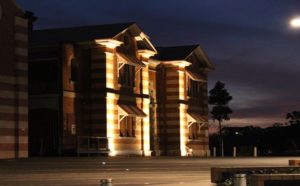 Jail Boggo Road in the Queensland city of Brisbane is now a museum that holds relics of Australia’s early penal system. The site was a notorious Australian prison located on Annerley Road in Dutton Park, an inner southern suburb of Brisbane, Queensland, Australia.

And the only surviving intact gaol in Queensland that reflects penological principles of the 19th century. For many years it was Queensland’s main prison. Inside, visitors see how the prison worked, its cell blocks, its old furnishings, and on some occasions, the ghosts of its former inmates.

Boggo Road was originally an unofficial and unmaintained short-cut between Ipswich Road and Stanley Street that became very boggy after rain. The Boggo Road Gaol site was designated as a penitentiary reserve in 1880.

The first cellblock (The ‘No.1 Division’) opened on 2 July 1883, and over the years many other buildings came and went on the site. It was the scene of 42 hangings, including the hanging of Ernest Austin in 1913—the last execution in Queensland.

The first buildings were built by Robert Porter, contained 57 cells. It is heritage-listed. In 1898, the state government deemed that a new women’s prison was also necessary, and the construction of the new facility began in October 1901. 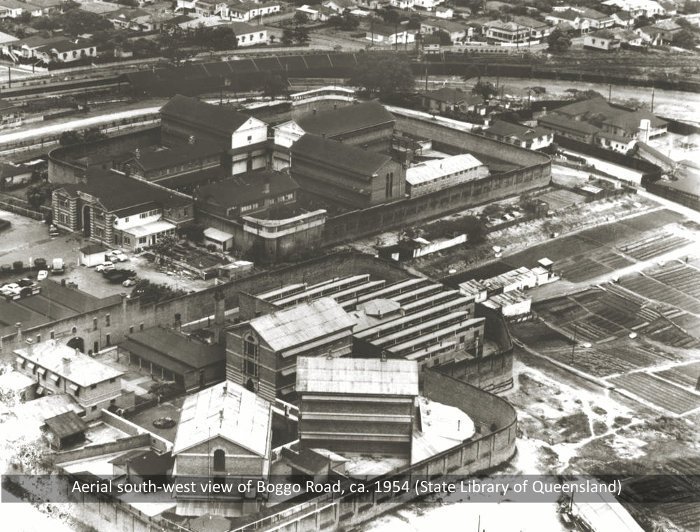 A new prison was built around the perimeter of No.1 prison during the 1960s and No.1 prison was demolished leaving area for an oval and recreational facilities for the newly built prison and this prison had running cold water and toilet facilities in all cells.

Under the oval was the facility that became known as the “black hole” where prisoners were subjected to “punishment”. The “black hole” continued in use until the late ’80s.

John Banks began working as a guard at Boggo Road in 1972. The prison closed in 1989, and most of Boggo Road’s buildings were demolished with the exception of division two. With the help of John Banks and two other former guards, the site became a museum in 1992.

More than 20,000 visitors a year pass through the iron gates to see what prison life was like. Boggo Road’s most well-known inmate is also one of its most notorious. The local lore says this notorious criminal is still around—that he made a deal with the devil.

On September 22, 1913, Ernest Austin had the distinction of being the last prisoner hung in all of Queensland before capital punishment was abolished throughout Australia in 1922.

Austin was sentenced to death for murdering an 11- year-old girl named Ivy Mitchell, who lived in the Samford section of northern Brisbane. Austin showed no remorse during his trial.

When Austin got to the gallows, the official report said he announced his remorse and then was hung without incident. But there’s another version—one that may explain why Austin might still be hanging around.

The historical record actually tells a very different version of events. Far from being proud of his crime, Austin had tried to hang himself in the police watch-house, and had appeared resigned during his trial and imprisonment. 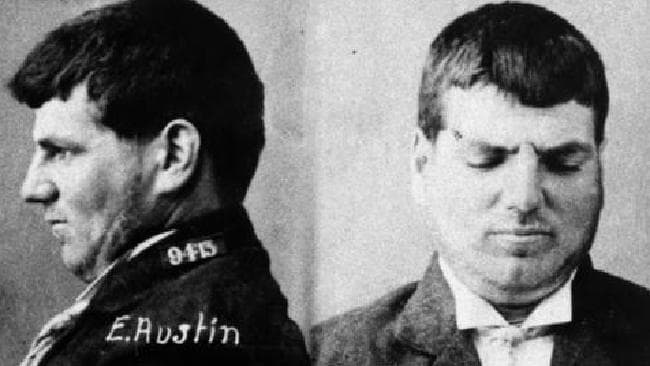 His execution took place in front of several reporters and officials, and although there were some minor discrepancies in their reports on the event, they all told a very different story to the one above. His last words, no doubt under the influence of morphine, were reported in the Brisbane Courier as:

A similar account appeared in the Truth newspaper, this one reporting that “God save the King” were his actual last words. Did they lie? It could be claimed that this version of events was just part of an official cover-up of the more-disturbing events on the gallows, as the authorities were trying to maintain public support for hanging and did not want the awful truth of what Austin had really said getting out.

However, the Courier and the Truth took opposing stands on capital punishment, so why write the same story? Surely it would have suited the anti-hanging propagandists at the Truth to print a story with Austin laughing at his executioners, showing the failure of the death sentence to impress any sense of repentance upon him.

The angle they instead took was to portray Austin as a ‘feeble-minded degenerate’, someone with a ‘mental deficiency’ who was raised in a home for neglected children and lived an institutionalized life that made a monster of him.

The headline proclaimed ‘THE STATE SLAYS ITS OWN CREATION’. Blame for the crime was to be shared with the state, his Frankensteinian creators. In later years, Austin was to be re-created again, this time as a supernatural demon.

Jack Sim, local Brisbane historian, has been running Brisbane Ghost Tours since 1998. “The papers at the time reported he [Austin] was sorry for what he did,” Sim said. “But old-timers here reckon he laughed and said:

‘She loved it’—referring to his victim—‘she enjoyed it’—referring to the terrible act he perpetrated upon her—and ‘I would do it again if I could.’ “As the executioner released the trapdoors beneath his feet, the murderer began to laugh, all the way to the very end of the 13-foot rope. Even then he tried to force out one last little chuckle from between his lips. It was said that the laughter was often heard in the early mornings in the cellblocks.”

According to Sim, some of the locals believed part of Austin’s agreement with the devil was to gather more souls. This could be part of the reason for many Austin sightings around the prison.

Sim said, “Ernest Austin was reported to torment the prisoners and guards for years after his death. The prison has what I would define as a haunted atmosphere. It definitely still has a feeling of human occupation, even though it’s been unused as a prison since 1992.”

One security feature of the prison was the peastone gravel placed all around the divisions. On quiet evenings it’s impossible to walk on the gravel without making a lot of crunching noise. Guards reported seeing darting shadows and other “ghosties” that their sleepy states seemed to induce.

There is a long history at Boggo Road of guards avoiding the night shift in all possible ways. “There were some ‘screws,’ who would not do the night shifts,” Sim said.

“When they were rostered onto night shifts, they would do anything to swap to a different night. Some of them appear on the rosters of the time, but they maintain that they actually didn’t show up; another officer took their place. One officer told me that a mate of his never once in 15 years as a guard here actually did night shift. On his record it says he did, as it does on his timesheets. But, a packet of tobacco slipped to the right person took care of the details.”

According to Sim, one documented ghost encounter occurred in 1970 when a prison officer saw what he referred to as a “big, white, shapeless mass” on top of the dividing wall of the exercise yard in the old number one division. This was in the early hours of the morning— the officer claimed the white mass slid off the wall and disappeared into the darkness.

Sim said, “The spot where he saw the ‘ghost’ was just behind A Wing, where the gallows used to be. The prison officer asked for a transfer to Townsville Jail. Who could blame him? I’d have transferred from here too if I could have.” 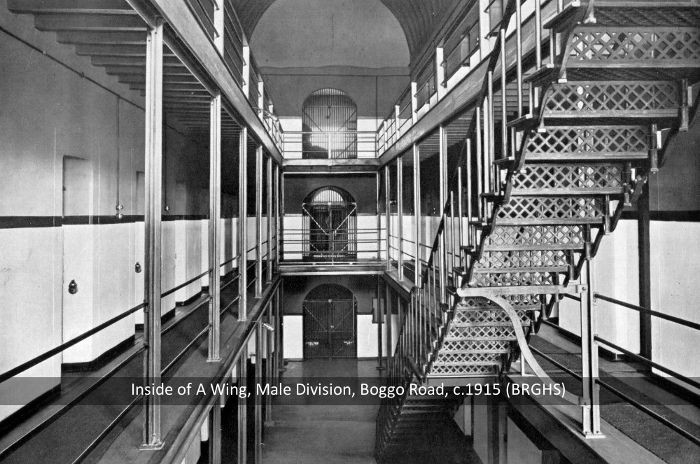 Although the exact number of prisoners who died at Boggo Road jail during its 106 years of operation is not exactly known, including account for executions, suicides, murders, disease, and natural causes, conservative estimates put the number of deaths in excess of 100.

Conditions were so bad at the prison that there were uprisings. From 1974 until 1985, prisoners insighted several riots. Clothing and furniture would be burned. The foam mattresses would be set ablaze until the foam melted into a boiling hot ooze of chemicals.

The rioting inmates would fill tins with the hot substance and throw it at the guards. Banks said, “It’s most probably as bad as what it would be in the front line of a war. It’s a hell of an experience. People yelling and smashing and making noises.” Watching out for the living inmates was not the only thing a Boggo Road guard had to encounter.

The first time Banks heard about the ghosts at Boggo Road Gaol was shortly after he started working there in the 1970s. “We had officers here you’d have to relieve at 2:00 in the morning because they just didn’t want to be here,” Banks said.

“They’d turn around and be white as a sheet and say, ‘I’ve seen a ghost.’ So you’d move him away from here and put him somewhere else. We’ve had officers here that have seen ghosts walk around. They’ll see a person walk by and they know quite well they’re the only one here.” The guard killed in 1966 has been spotted in the jail by guards and visitors alike.

Sim has spotted a specter on his ghost tours at Boggo Road. He said, “I’ve seen the ghost of a prison officer walking the grounds of number two division; there’s no doubt.” Some of the prisoners at Boggo Road Gaol appear to have an eternal life sentence.

The old buildings, cells, and furniture speak to passersby of a rigid lifestyle where some prisoners were forced into submission, others into madness and suicide, and some were lucky enough to get out and on with their lives.