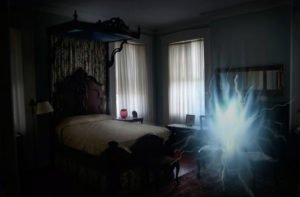 It’s taken a long time to be able to share this ghost story, but it’s changed my view of death enough that I feel I should share it.

A couple of years after my wife and I were married we got the horrifying news that her oldest brother had been killed in an accident. We were lost in the fog of grief and trying to deal with the sudden tragedy.

We naturally couldn’t sleep well and mostly just sat in bed holding each other. After two nights we were both so exhausted that we were finally able to drift off. Then something roused me.

I looked at the clock which read 2:05 am, then as my eyes cleared I saw a blue-white glow in one corner of the bedroom. It shaped itself into a vertical oblong, maybe 1.2-1.5 m high but without any other distinguishing features.

Rather than being frightened I felt a deep sense of calm come over me.

Inside my head, I heard the words “I’m OK, everything’s all right. Please take care of her.”

The light immediately vanished and somehow I quickly fell back asleep rather than staying awake.

I didn’t say anything the next morning because I thought I’d had either a dream or a fatigue-induced hallucination. My wife, though, was also unusually quiet. After breakfast she asked if I’d seen anything unusual last night. I said yes but didn’t offer any details.

Both of us were educated as scientists so I said we should use our training to avoid planting suggestions. We decided to write descriptions of what we’d seen, then share them.

Everything was the same. The time, the light, the soundless words they all matched.

Neither of us is particularly religious so we’re doubtful this experience could be related to any belief system. All we can think is that there really is more beyond this existence, that there’s something of an “us” – call it a soul, a force, whatever – that persists.