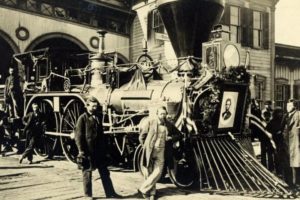 Almost certainly the most famous ghost train in America is the one that took President Abraham Lincoln home after he was assassinated in 1865. (The exhumed body of this son Willie, was also on the train).

Against his wife’s wishes it was decided that Lincoln’s body would be displayed on a funeral train that would stop at various towns throughout the northern part of the United States on its way to Springfield, Illinois.

Although the body was embalmed, some funeral employees were enlisted to travel with the deceased president, as was the embalmer himself, in order to keep his body looking as presentable as possible. They used fresh flowers to mask the smell, which meant the train had to make frequent stops to collect fresh flowers.

The train traveled in a zigzag pattern so that it could stop in all the major cities in the area as well as several smaller communities, and all along the path of the train, men, women and children lined up along the tracks to pay their respects to a man who had become a hero to most of the people in the north.

The train left Washington DC on April 21, 1865, and on April 29, the train arrived in Columbus where Lincoln’s body was displayed in the statehouse rotunda for about twelve hours. Over fifty thousand people came to the statehouse to pay their respects. The train left around 8 pm, heading west. This was unusual, as the way west was one of the steepest grades in Ohio, and it would require two engines to make the trip. Normally trains would head south to Cincinnati, but there was a concern that Copperheads (anti-civil war protesters) would potentially make trouble for the train if it went through the Queen City.

Instead, the train took the western tracks and late that night passed into Urbana. Many people assume it stopped at the Miami Street depot, the only train station still in town, but it actually stopped at the North Main Street station, which no longer exists. The train was met by a large flower archway over the tracks and several hundred mourners who brought wreaths of flowers.

The train was only in town for about twenty minutes and to the contrary of some urban legends, it did not break down there. The train then left Urbana, heading west to Piqua where it stopped again for a short time just after midnight. The train eventually made it to Springfield, Illinois on schedule where the president was interred.

Even before the first anniversary of Lincoln’s death reports of the Ghost Train began to trickle in. The original stories were reported in the Hudson River Valley.

Every year since, at the end of April during the anniversary of the first funeral trip, people along the train’s original route report seeing a strange sight, an eerie spectral train passing silently along the tracks, sometimes on existing tracks and sometimes on a route where tracks once were.

The ghost train, it was said, was crewed by skeletons and a similar skeleton honor guard stood watch over the casket. The sound of the train’s whistle, (quite different from the trains of today), could sometimes be heard, or a puff of smoke from the invisible passing train might be seen, and reports of clocks that would stop for anywhere from six minutes to twenty (the length of the actual stay).