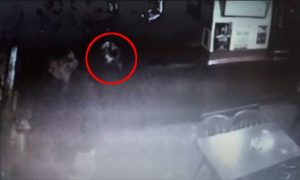 Pub “The Dolphin” in Littlehampton, West Sussex, is often called the UK’s most haunted pub. Visitors of the pub, which was built in 1735, occasionally see anomalous phenomena and ghosts, and all this is difficult to simply write off as “alcoholics hallucinations”.

Recently, a surveillance camera filmed another ghost or some other creature that seemed to sneak up on a visitor sitting at the bar counter.

The video recording is of very poor quality, since it is filmed on the phone from the computer screen, however it is clear that this is not another visitor or an animal.

Moreover, as it turned out, this object was not just captured by the camera, but the sitting man also felt someone approaching next to him.

“He is a poker player and he was always a great skeptic. But then he called me and said that something white flashed next to him and immediately disappeared,” says pub owner Ellie Boiling.

According to the woman, the man was not drunk and was not under the influence of drugs. He also asked her to watch the recording from the surveillance camera, as he was sure that he had definitely seen something and did not seem to him.

“When I saw THIS on the record, I was only able to say, “My God. ”I was shocked and at first decided to calm myself, having decided that the dog just ran in. But there were no dogs. And when I showed the record to him, he was shocked. Up to this point, everyone considered him the greatest skeptic in the world. ”

According to Ellie Boiling, the ghost of a woman in white, the ghost of a soldier in camouflage was seen in this pub, and an invisible mischievous man, who throws 20 pence coins at people, lives here.

Ellie herself believes that the ghost captured in the video is probably the ghost of a girl named Little Dolly. One day, Ellie found in the pub an old broken photographic plate with a picture of a little girl on it.

Later, one of the visitors told her that 100 years ago his grandfather was the owner of this pub and he had 14 children. One of them died of diphtheria at a young age, and all of her name was Little Dolly. Most likely it was she who was filmed on the surveillance camera.