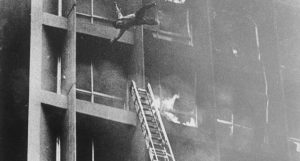 In 1974 a 25-story building in São Paulo, Brazil caught fire and it took with it the lives of 189 people, but this was only the grand finale to an evil almost 400 years old, one that legend tells began with the cursed souls of thirteen Jesuit colonists and ends with the arrival of thirteen saints. Welcome to the Joelma Building…

The large number of witnesses to the paranormal events at the Joelma Building alone define it as an exceptionally haunted location, but it’s the land at 225 Avenida 9 de Julho that carries a much more terrifying curse.

The Beginnings of the Joelma Building Haunting

The curse most likely began in 1554 with the Founding of São Paulo when Vasco da Gama arrived with his Portuguese invaders. First to arrive on the land that is now São Paulo was a group of twelve priests and their altar boy.

This small group established the land’s first Jesuit College. Legend tells that these first thirteen colonists were cursed by the local tribe to take the lives and collect the souls of their fellow Christians that dared live on the land.

Almost 400 years later São Paulo had grown to a massive city, the original Jesuit College was gone, but reconstructed in the city centre as a historical landmark. At 225 Avenida 9 de Julho there was a house where Paul Campbell, a respected chemistry professor lived with his family and extended family.

One day Paul arrived home, gun in hand and killed all those within the house including his mother and sisters. He buried the bodies in a pit in the backyard then turned the gun on himself. Only twelve people died in the murders that day, but when a fire-fighter caught an infection from the corpses and died the following day word spread that the curse was alive and well.

The house would remain vacant for the next twenty five years, until in 1972 when the Joelma Building was erected in its place. Given the history of the property the developers had the address changed hoping to obscure the grisly reputation, but curses don’t follow addresses.

Despite the change in address witnesses would speak of minor but constant disturbances throughout the building – many even claimed to have seen the Campbell family walking the halls together.

Only two years later an electrical fire ignited in the twenty five story buildings air conditioning unit and the entire building was engulfed in flames within 20 minutes. By the time the fire was brought under control the tragedy had hospitalized 345 people, and killed another 189.

However, there were thirteen victims that no witness was able to place in the building prior to the fire. 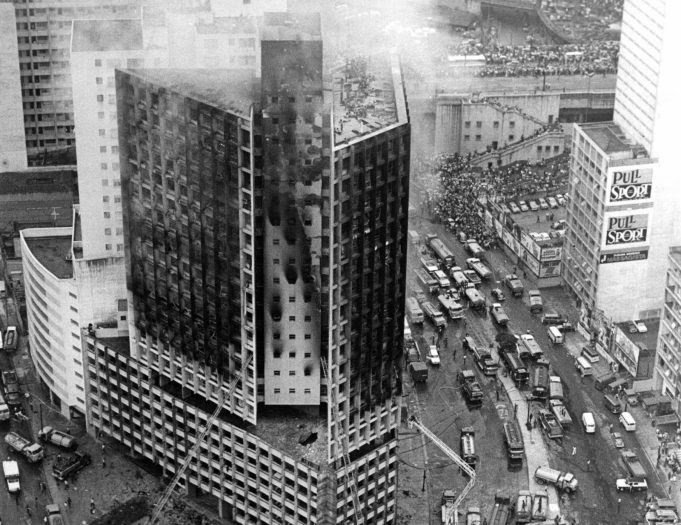 Fire marshals and investigators were able to determine that they had been in an elevator where the temperatures would have reached up to 700 degrees and roasted alive anybody within it. Miraculously they survived and escaped the elevator, even more miraculous was their journey to the door of the building nineteen stories below.

A mass of witnesses saw the thirteen emerge as a group from the flames and smoke only to fall to the ground once outside. All thirteen died of what was declared to be smoke inhalation.

At first it was rumours, locals would tell of illnesses vanishing as they passed the graves, and those rumours would grow until people were travelling from across Brazil to ask that their miracles be granted.

Although the church has never formally recognized the thirteen, locals of São Paulo and many more from across the country regard the burial site as a holy place where the ill are cured and wishes come true.