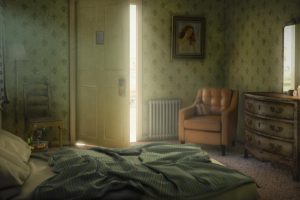 This would become the first poltergeist case that was investigated by parapsychologists, the police and a priest. The year was 1958.

On February 6th and 7th, 1958, strange events happened in the pious Roman Catholic middle class home of Mr. and Mrs. James Hermann and their children, Lucy, 13 and Jimmy, 12.

Different types of bottles with screwed on tops opened and spilled of their own accord in various rooms in the house and made popping noises. Knick-knacks flew or were damaged and there were thumping noises.

Father William McLeod placed bottles of holy water around the house. He was fascinated with poltergeists and was familiar with the haunting of Epworth Rectory and the Reverend John Wesley’s experiences with one. This exacerbated the activity and the holy water was not immune to being spilled.

The police investigated. Detective Joseph Tozzi and James blamed Jimmy for the mischief. The boy denied this. Brookhaven Laboratory specialist Robert Zider had a theory that water below the house was responsible and used a dowsing rod to no avail to confirm this.

Finally, Father William applied to the diocese bishop for permission to perform an exorcism. The media published the events of the eerie phenomena which attracted the attention of highly respected parapsychologists Drs. William Roll and J. Gaither Pratt who would investigate.

Parapsychological Investigation of the Poltergeist

They interviewed the family. All disturbances were reported to the police.

The strange events happened only when Jimmy was awake and at home. The parapsychologists concluded that fraud was almost impossible. The logistics of the phenomena and the fact that there was no evidence that family members were producing it reinforced their conclusion.

The end of the activity occurred on March 10th . Roll, Pratt and the family were present. No one saw the actual occurrence. There was a popping sound in the basement. A half full bleach bottle’s lid was off and landed right side up, marking the floor with liquid.

The bleach from the container was not spilled. This was the last phenomenon. The conclusion was that Jimmy was an HAP, human agent poltergeist.

Parapsychology has advanced since then as the Miami poltergeist evidences. Julio wreaked havoc in a warehouse. Roll and Pratt also investigated this case.

Julio, the HAP, was tested for PK, psychokinesis, the ability of the mind to affect matter and ESP. They also gave him psychological tests. The results fit the profile of the HAP, a person who is experiencing unpleasant emotions and represses them by unleashing subconscious PK. Julio tested higher than the norm for PK.