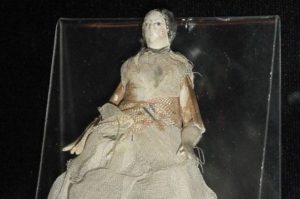 A doll doesn’t necessarily need to be cursed or possessed to be a little bit on the creepy side. Such is the case with Patty Reed’s doll.

Patty, aged eight, was traveling to California in 1846 with her family and other pioneers, a group that became known to history as the Donner Party. Already running behind schedule, Patty had been asked by her family to discard all of her beloved toys to help lighten the load, in the hopes of traveling fast enough to get to California before the winter weather trapped them.

But, though she complied, Patty managed to smuggle her beloved dollhouse doll beneath her voluminous dress in a moment of childhood defiance and smuggled her to California.

Ultimately unseasonably early and harsh winter weather trapped the Donner Party in the Sierras for months, slowly starving the pioneer families to death. Facing mountains of snow and months of freezing weather with no provisions, the starving settlers found themselves in an increasingly desperate situation. When people began to die, the survivors resorted to cannibalism.

Ultimately, of the 87 members of the party, only 48 survived to tell the tale.

The entire Reed family, along with the doll, miraculously survived their hellish journey west and were able to enjoy a comfortable life in San Jose where several streets bear the family’s name. The 4” doll was donated to Sutter’s Fort by the family, and Patty’s doll is now on display at Sutter’s Fort State Historical Park Museum in Sacramento, California.

While this doll isn’t known to be haunted, it has a rather macabre place in history, and it’s difficult not to look at it and not immediately think of little Patty Reed chewing on human flesh.