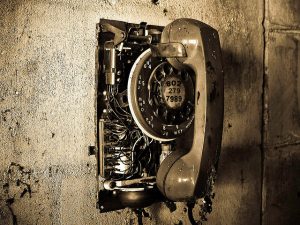 On of those who died in that horrible accident was Charles Peck.Medical examination of his body showed that he had died quickly after the collision, almost instantaneously. But for hours after his death, his family received a total of 35 calls from his cell phone. At 9:08PM nearly five hours after the crash, Peck’s fiancé Andrea Katz received one of those calls. But when she answered, all she heard was static. Despite hearing nothing from the other side she told him to hang on and that help was on the way.

Whenever they tried to call him back all the calls were routed to the voicemail.

When the rescue efforts stopped at the scene and the rescue workers turned to the grim task of recovery another call came from his phone and the search crews decided to trace it. They found it had come from the first train, so they went back to scour the rubble in hopes of finding him alive. The last phone call came from Charles Peck’s phone at 3:28AM, almost an hour before they found his lifeless body.

This is a phenomenon in which people literally receive phone calls from the dead. The deceased caller usually had a closed relationship with the recipient. In such calls, the telephone usually rings normally, but may sound flat and abnormal. Usually the connection is bad and the voice of the deceased fades. The voice is recognizable, however, and usually speaks familiar or pet names and words. The phone call is terminated abruptly, either by the caller or by the line going dead. If the voice is too faint, the recipient may hang up in frustration.

Generally the purpose of such mysterious calls seems to be to leave a farewell message, or a warning of an impending danger, or information needed by the living. Actress Ida Lupino received a phone call from her father six months after his death; he told her the whereabouts of some papers to settle his estate.

Phone calls from the dead.

Sometimes like in the case of Peck, the family receives a phone call from the phone of the deceased. It could come from a cell or a landline in the deceased’s uninhabited home. Other times just before the terminally ill patient dies they receive a phone call from a long departed loved one. In many instances the numbers had even been disconnected. But they still appeared on caller id. Every time the living picks up the phone all they hear on the other end is static. There have been instances of those who receive the calls recording them only to find voices in the recording that were not perceptible to the human ear at the time.
Here are two of the tales

Mark Prebost had lived a good long life and had outlives most of his family and friends. Tragically he had outlived many of his children as well in reaching the ripe old age of 93. When he was diagnosed with prostate cancer he took it with a grain of salt. He would often say he lived longer than he would ever have thought, but still he would miss his family. He especially loved the parties.

The disease ravaged the elderly man and the pain was severe and constant. His elderly daughter and her children took care of him in his home, rotating the times they stayed with him until the cancer that had spread through his body finally took his life one cold October day. The daughter was relieved since her elderly father had gone through so much pain in the last few months, and even though she did not believe in an afterlife she comforted herself with the fact he was no longer suffering.

His funeral was sparse since he had few friends and relatives left alive. And after the funeral those who did attend went to the daughter’s house for a memorial service and dinner. As the night wore on they kept getting phone calls with dead air. Finally the daughter noticed the caller ID. The calls were coming from her father’s house. There was no one there, she had the keys. They received a few more calls during the evening and she let the answering machine pick them up.

The next day out of curiosity she reviewed the final two phone calls that the machine had recorded. She heard on the tape the faint voice of her father saying, “It’s ok Margie, I’m ok” and “Your Momma is with me, all is good”. Like so many EVPs the speech is faint and hard to hear. But Marge was sure of what she heard. Her father was saying goodbye and letting her know that he still existed in some form. A form that was safe, happy and with the wife that he had loved and lost so many years ago.

It did not look good for Lisa. The teenager had gone through years of treatment but the anguish of the chemotherapy seemed to be all for naught. The leukemia had finally overwhelmed her body and she was in the last days of her short young life. Her father sat in vigil beside her, holding her hand and wiping her brow as she sweat while the final battle raged within her fragile body. Her mother had passed a few years earlier in a horrific car crash. In those last days her father sat by powerless as Lisa cried out for her mother. He tried to comfort her but it seemed that his presence, even though ever caring, was not enough.

As the father sat with her on her last night with a nurse by her side the phone rang. He left Lisa a lone with the nurse for a few moments to answer it, but on the other side there was a large amount of static. He thought for a second that through the static he had heard a woman’s voice say something but it was indiscernible. After he turned the phone off he checked the caller ID to see who it was that had called. The answer stopped him in his tracks.

The phone number was that of his house five years ago. The number had long been disconnected, right after the death of his wife. He tried to call back but got the familiar robotic woman’s voice advising him that the number was indeed no longer in service. Immediately he was called back into the room by the nurse. His daughter was passing. She died within a few minutes of the mysterious phone call. A phone call that he still believes was made by his long deceased wife. And upon reflection he is sure the faint words he had heard through the static had said, “She will be safe with me”.