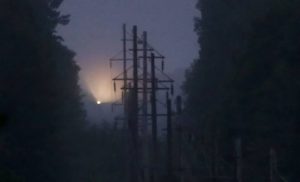 The Paulding Light (also called the Lights of Paulding or the Dog Meadow Light) is a light that appears in a valley outside Paulding, Michigan. Reports of the light have appeared since the 1960s, with popular folklore providing such explanations as ghosts, geologic activity, or swamp gas. – zenonas.sg-host.com

This is a true account of my experiences with the Paulding Light. This phenomenon is located in the Upper Peninsula of Michigan a few miles north of the Wisconsin border. It has actually been documented in books and supposedly on Unsolved Mysteries, though I haven’t seen the episode.

My friends and I go camping in the Northwoods of Wisconsin regularly. My friend Steve heard about the Paulding Light from friends of his at college.

Since it is not too far from where we camp we decided to visit it.

The story behind this light is that it is the ghost of a railroad signalman who was killed in the 1800’s. He supposedly walks the old rail road grade and waves his lantern every night.

To see the light you have to drive along a gravel road off the main highway for about a half mile. Then you come to a metal barrier which (like a guard rail) across the road and park. The road continues on the other side of the rail, down into a steep little valley with a creek at the bottom then back up. On the other side there is another metal barrier. Most people don’t cross the creek for reasons I will come to later.

Anyway, we parked at the first guard rail and sat among a group of other people to watch the light. It appeared in the distance seemingly on the other side of the far metal barrier. At first it was white then changed to red. It got brighter then darker, sometimes moving towards us, and occasionally disappearing for as long as a few minutes.

On the way back to the campground we discussed the probable causes of the light. I am a die-hard skeptic, and in the end I concluded that it was merely the lights of cars on the highway which was some distance away through the woods in the general direction the road takes.

Well, one visit to this fascinating phenomenon just wasn’t enough. We went back a second time and decided to follow the road as far as we could to see if we could get close to the light. We crossed the first guard rail and went down the hill to the creek.

There was a makeshift bridge of two by fours so we crossed and went up the other side. After crossing the second guard rail we kept walking for about a half mile before the road curved away from the old railroad grade.

Here we decided to turn back because we hadn’t seen the light since crossing the creek, even though it had been very active before we left the first rail. When we got back some of the other people gathered around asked if we had seen the light. We said no, and they all seemed surprised. Just after we left they said it had gotten particularly bright and changed colors more often than usual. I don’t know why we couldn’t see it from across the creek, and I’m not sure I want to.

The third time we went back we witnessed apparent communication with the light (no ouija board involved). A bunch of high school kids had brought along their unused Fourth of July fireworks. They began setting them off near the guardrail. Now the kids had a pretty good assortment, lots of different colors. Until this time I had only every seen the light be either white or red, though people had told me it occasionally would appear as other colors like green or blue. Well each time a different color firework went off, the light would match the color. It was pretty weird.

So by this time all of us were pretty obsessed with the Paulding Light and we would visit it every time we were camping. These visits took place over the course of about four years.

There are two more incidents that I want to relate because they were particularly spooky (even for a skeptic).

The first happened one night we took several people who had never seen the light before for their first glimpse of it. As it happened the light was particularly active and bright that night. I changed colors often and even split into two light. We stayed fascinated for more than an hour.

Then suddenly the light turned pure white and very bright and started rushing towards where we were standing at the first guardrail. I swear that it got to within 10 feet of us before it disappeared. Thoroughly spooked we rushed to our cars and hightailed it for the campground.

The second incident involves my immediate family. We decided to take a camping trip together and since I had been regaling them with stories of the Paulding Light they wanted to visit it. We got there and my dad (who is a true empiricist) had to walk the road, cross the creek, etc.

My sister, brother, and I went with him, leaving my mom (who really didn’t believe the whole thing and was tired anyway) dozing in the car. We walked to the bend in the road without seeing anything unusual. So we headed back. When we got to the top of the hill and the first guardrail again, my brother and dad started talking to regulars while my sister and I watched the light. She and I were getting tired so I turned to tell Dad and my brother that we were headed to the car to wait with mom.

I saw my dad talking to a man holding a flashlight, but I couldn’t see Jacob (my brother). The man aimed his light in the direction he and my dad were looking. Strangely the beam seemed to stop abruptly about 6 or 7 feet from him.

He said something to my dad I couldn’t hear, and a second later my brother stepped out of the darkness just where the flashlight beam ended. According to this man there are “dark spots” all over in the area where light can’t penetrate. Reasonably the flashlight should have picked up my brother (who had been standing there all the time) but the light couldn’t go past a certain point. He said he could see everything fine even though we couldn’t see him.

So there you have it. Despite these occurrences I am still skeptical. I have to admit that there are some pretty strange things happening in Paulding, but I’m not sure they have supernatural explanations. Still I was as scared as anyone when the light rushed us and as baffled by the “dark spot”.

If you are every in the neighborhood, I urge you to visit this haunting. I have enjoyed reading other peoples ghost stories there.