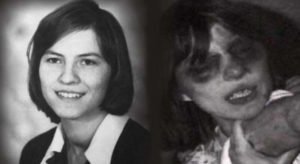 There were many tales of unexplained possessions and most of them are unsolved, untouched or remained secret.

Through the years, many are cautious to dig deeper of this paranormal phenomenon and leave it to those brave enough to face what they called “the curse of exorcism”.

Is it true that a demon can penetrate and control the human body to the extent that unexpected actions and harsh words will be exhibited? Or it was just a psychological disorder as science explained?

As believed by experts, although victims are possessed by evil, they are not regarded as evil in themselves, nor wholly responsible for their actions. Therefore, practitioners regard exorcism as more of a cure than a punishment. As a result some possessed people were cured, but some never came back again to their body and died.

Anneliese Michel, 23 very religious and nurtured girl died on July 1, 1976 after almost 9 months of exorcism. It all began 8 years earlier when she experienced shaking without any means of help. Later, she was diagnosed of having Epilepsy also known as “Grand Mal”. After that, she changed a lot and most of the time depressed.

After a long stay at the Hospital, she thought that everything will be back to normal, but it’s not. She begins to see devilish grimaces among people’s faces during her daily prayer.

From that time, she was believed to be possessed. She can’t find any reason and explanation why she sees grimaces. More days passed and she began to hear voices following her, saying that Anneliese will “stew in hell”.

She became more depressed and find no reason meeting doctors for she knew that they can’t help her in her condition. She had hesitation opening to doctors about “Demons” for she’s afraid not to be believed. And one time, she told a Doctor about the “Demons”, and the result was expected.

Finally her parents noticed that their daughter might be possessed so they ask different Pastors for an Exorcism. Unfortunately, the Catholic Chaplains rejected and recommended to continue the medication for the proof for a possession (Infestation) is strictly structured, and before not all criterions are fulfilled, the Bishop can’t approve an Exorcism.

“Pastor Ernst Alt, supervising Anneliese at that time, asked the Bishop of Würzburg for the Permit to perform an Exorcism on Anneliese Michel in 1974. His request was also rejected, so he recommends Anneliese an even more religious Lifestyle.”

“But the attacks did not disappear, and she became more terrible. At her parents’ house in Klingenberg, she often insults, beats and bites the family members. She doesn’t eat because the demons don’t allow her to. Anneliese sleeps at the stone floor, eats Spiders, Flies and Coal. She even drinks her own Urine.

For hours, she yells through the house. Anneliese breaks Crucifixes, destroys paintings of Jesus and demolishes Rosaries. Running through the house, tearing the clothes from her body and urinating on the floor is nothing unusual anymore. She even commits self-mutilation.”

After an exact Verification in September 1975, Josef Stangl the Bishop of Würzburg, assigns Father Arnold Renz and Pastor Ernst Alt with the order, to perform “The Great Exorcism” on Anneliese Michel.

The basis for this ritual is the “Rituale Romanum”, a still valid Canon Law from the 17th century. Pastor Alt and Father Renz try to save Anneliese from, in the meantime over 6 individuals (Lucifer, Judas Iscariot, Nero, Cain, Hitler and Fleischmann, a disgraced Frankish Priest from the 16th century, and some other “Damned”), which manifested through her.

From September ’75 till July ’76, 1 to 2 sessions a week were held. Sometimes her attacks were so strong, that she had to be hold down by 3 men, or they had to chain her up.

Between those sessions in her parent’s house, Anneliese has some time without any attacks, in which she goes to school, makes her final examinations at the Pedagogic Academy in Würzburg and goes to church. Just like she used to live before.

The Exorcism continues over weeks and months, always praying the same specified prayers and incantations, over and over again. As expected, the ritual might be working but the attacks didn’t stop. The young woman gets unconscious and paralyzed more often.

Sometimes the parents are present, or her sisters. Even a married couple, that claims of having “discovered” Anneliese. Over several weeks, she denies every food. Her knees are burst, because of the 600 Genuflections she does obsessive during the Exorcisms. During the Exorcism there were over 40 audio tapes recorded, to log the possession.

The last day of the Exorcism Rite is the 30th of June 1976. But she can’t waive doing the Genuflections because Anneliese is now also suffering from Pneumonia, totally emaciated and having high temperature.

Her parents even help her doing them. “Beg for Absolution.”, is the last sentence Anneliese says to the Exorcists. To her mother she says: “Mother, I’m afraid.”. Anna Michel recorded the death of her daughter on the next day, the 1st of July 1976. At Noon, Pastor Ernst Alt informs the prosecuting authorities in Aschaffenburg. The Senior Prosecutor began investigating.

There were only 2 questions to answer. What caused the death of Anneliese Michel, and who was responsible? 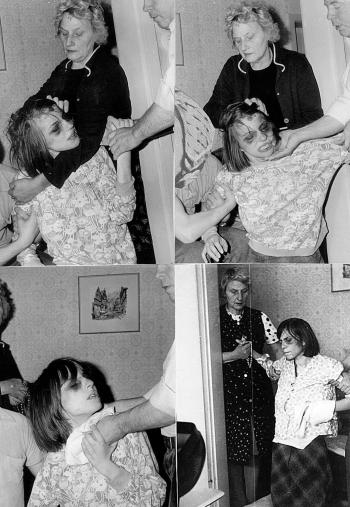 The cause of death, as diagnosed by the Forensics: “Anneliese starved to death” ! If the Accused would have begun with forced feed, one week before her dead, Anneliese’s live could have been saved. Her sister told in front of the court, that Anneliese didn’t want to go to a Mental House, sedated and forced to eat.

The Exorcists tried to prove the presence of the demons, by playing the tapes they recorded. There were such strange dialogues, like 2 of the demons arguing , who of them has to leave Anneliese’s body first.

The demon, that called himself Hitler, talked with Frankish Accent (Hitler was born Austrian). None of those present during the Exorcisms, never had a doubt, that this weren’t demons.

A Commission of the German Bishop-Conference later declared, that Anneliese Michel was not possessed.

The judgment was, although the parents and the chaplains were adjudged guilty, not as hard as expected. All of the accused were sentenced to 6 months jail on probation, because of manslaughter resulting from negligence and omitted First Aid.

The accused should have helped by taking care of the medical treatment the girl needed. But instead of doing so they aggravated the bad constitution, by using naive Practices.

In contrary, it was said that her body doesn’t decay, her corpse gets exhumed 1 1/2 year after the burial. People believed that Anneliese’s body didn’t even find peace after the girl’s death. Till now her grave is a place of pilgrimage, for Rosary-praying pilgrims, who still think, that Anneliese Michel has defeated the Devil.