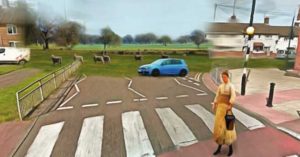 After a century of speculation, gravitational waves were finally detected by physicists last September, and the momentous discovery proves once and for all that timewarps are a real phenomenon and not just something used by science fiction writers as a plot device.

I have known for years that time and space could be warped, as I have catalogued many timeslips and experienced a few of them myself over the years, but first – what are gravitational waves?

Anything with mass bends space, just as the iron ball bends the sheet of the trampoline.

Starlight rays do the same when they pass near massive objects such as the sun – they bend slightly.

Now, Einstein proved that time and space are welded together inseparably into what is known as the space-time continuum; and so, gravity does not only affect space – it also affects the running of time too.

This has been proven with highly sensitive chronometers which show that time travels slower at ground level than it does in your loft, because the earth’s gravity gets weaker as we rise up from the ground.

The discovery of gravity waves will undoubtedly lead to a leap in our understanding of how they affect the flow of time – and this new knowledge will lead to the construction of the time machine – a contraption that will open up the past and the future.

Before man knew about the existence of electricity, lightning was regarded as some supernatural force – or even a sign that the gods were not pleased – but now we know just what lightning is and we could even create it if we wished.

The same may be true about timeslips – mysterious incidents which have happened throughout history where everyday people have found themselves momentarily transported into the past or future.

These timeslips are still regarded by some as a supernatural phenomenon, but it is likely that some of them are due to some unknown localised disturbance of the space-time continuum, either by Mother Nature – or perhaps through some future scientists meddling with time travel.

In May 2015, a reader named Philip dropped his wife off at a beauty salon on Park Brow Drive on Kirkby, then headed to the junction at Broad Lane in his Volkswagen Golf.

The car shuddered as it reached the junction and Philip found himself driving through thick grass. To Philip’s right, most of the Kirkby he knew was missing – instead there were fields stretching as far as he could see, and yet he could see the ghostly shapes of Gaywood Green Heights, and they looked semi-transparent.

Broad Lane was now covered with grass, and there were flocks of sheep all around.

The car stalled, and Philip restarted it and looked to his left, and he could see that Broad Lane and the row of shops there were still firmly in the 21st century – but there was one anomaly – and that was a woman in a long old-fashioned apron, walking just a few feet parallel to the zebra crossing, and upon reaching the tactile paving of the zebra, the woman, who was carrying a bucket or pale of some sort, suddenly vanished into thin air.

As this lady disappeared, Philip looked in his rear view mirror and saw that the fields behind him had also vanished, along with the sheep, and now he could clearly see Gaywood Green Heights.

Philip was going to tell his wife what had happened but thought the far-fetched-sounding tale would embarrass her in the salon, so he drove to a friend’s house in Simonswood, and this friend told Philip he had probably experienced a timeslip.

Philip got in touch with me and asked if any such timeslips had been experienced in that part of Kirkby, and I looked through my records to find out that there had – back in 1962.

That year, during the construction of Gaywood Green Heights two workers employed by the construction firm UNIT were having a smoke during a morning break about six storeys up, leaning on scaffolding as they took in the panoramic view to the north – across Kersey Road.

All of a sudden, all of the houses stretching across the area vanished. The entire districts of Westvale, Northwood and Southdene below were gone, and all the two builders could see was a patchwork of fields in every shade of green and brown, and what looked like small farmhouses were dotted about the unfamiliar sparse terrain. No churches – not even the distinctive outline of St Chad’s – could be seen.

During this incredible mass disappearance of the houses of Kirkby, a hard silence fell on the building site for what seemed like fifteen seconds – and then all of the distant sounds of traffic returned, and so did all of the familiar buildings which made up the landscape below.

It was 1962, and the men knew they’d be regarded as mentally unstable if they told anyone what they had seen, and they wanted to continue working in their well-paid jobs.

One of the men later wrote to me and told me what had happened, and I believe he and his workmate had seen Kirkby as it was before St Chad’s was built (1869-71).