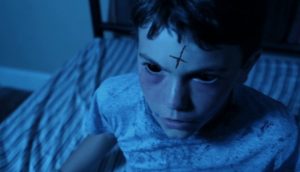 In January 1949, the Deens were disturbed by scratching sounds coming from their walls and ceiling in their home in a Maryland suburb of Washington DC.

They believed they had rodents and called in an exterminator who found no evidence of the critters. Although he tried to get rid of the animals, the noises only became louder. Then, there were noises like someone walking in the hall with squeaky shoes. At times, furniture and dishes moved for no apparent reason.

Then, Douglas Deen was attacked. His bed shook and the bedclothes were pulled off. When he tried to hold onto them, he was pulled to the floor.

Finally, the Deens were convinced that they had an evil spirit and asked their Lutheran minister, Rev Luther Schultz for help, according to Guiley and most of the articles I have read. According to, solely to Wilson, the Lutheran minister’s name was M. Winston. I use the name that the majority of sources use.

Schultz tried to help. He said prayers for Douglass and asked the thing that possessed the boy to leave him alone in the name of the Father, Son and Holy Ghost.

The terrifying events continued and the boy could not sleep. In February, the Rev. Schultz invited the boy to spend the night at his house.

Mrs. Schultz spent the night in the guest room and Douglass and Schultz were going to sleep in the twin beds in the master bedroom.

Schultz heard Douglass’ bed creating, then felt it. It was vibrating. The boy was awake, but lay very still.

Schultz suggested Douglass sleep in a heavy arm chair and kept watch. The chair moved backwards several inches. The minister told Douglass to put his legs on the chair, giving it his full weight. The chair continued to move until it ran into the wall.

The chair began to turn, in surreal slow motion until it dumped Douglass on the floor. He was not hurt. Schultz noticed that the boy appeared to be in a trance and had not tried to get out of the slow moving chair.

The next day, Schultz persuaded to have Douglass treated at a mental health clinic. The boy acted wildly and the words, “Go to St. Louis,” appeared on his chest. The color was red, like blood.

Douglass’ favorite aunt lived in that city, so he was sent to the St. Louis Hospital. The family thought it would be good for him. Then, he exhibited symptoms characteristic of possession. He drooled steadily and coughed up phlegm. Scratches appeared on his arms.

It was decided to exorcise the boy. For 35 days, three Jesuit priests and an Episcopal priest and a Lutheran minister performed at least twenty exorcisms.

Douglass’ body would jerk violently. He had supernatural strength and spat in the exorcists’ eyes. The attacks abated and, after he returned home, they disappeared.

Father Walter Halloran, a Jesuit Priest and the last living exorcist who performed the rite on Douglass, died on March 9th of this year. According to what he said during an interview, Father William S. Bowden asked him to help with the exorcism. It was performed at Alexian Brothers Hospital.

The boy would get violent and the elder priest needed someone strong to help him. One day, Douglass, in a violent fit, broker Father Halloran’s nose.

According to Wilson, the boy replied to the rite of exorcism in Latin. This could have happened. I have not read this in other accounts. It is Wilson’s reasoning as to why the boy could speak in Latin that I have a problem with.

According to this author, Douglass could have unconsciously picked up the language at “mass” at church. He wrote that the parents appealed to their Lutheran minister for help. Lutherans do not have mass and they do not and did not, in 1949, conduct services in Latin. According to all accounts I have read, the boy was Lutheran.

Schultz contacted J. B. Rhine was the director of the Parapsychology Laboratory at Duke University. Rhine and his wife, Louisa, also a parapsychologist drove to Washington to talk to Schultz about the case. By this time, the phenomena had ceased, so the Rhines could not make personal evaluations.

The Deens, the Rev. Schultz and the exorcists were convinced Douglass was possessed. Rhine differed. He believed that the boy was expressing his unconscious ability to affect matter, PK, psychokinesis, the ability of the mind to affect matter which is the phenomena that occurs in poltergeist cases.

It is possible that Douglass could have been a human agent poltergeist. The second and third stages of possession, infestation and obsession are poltergeist activity.